The Art of Appetizing Aromatics: Part 2 of Psychedelic Chemistry 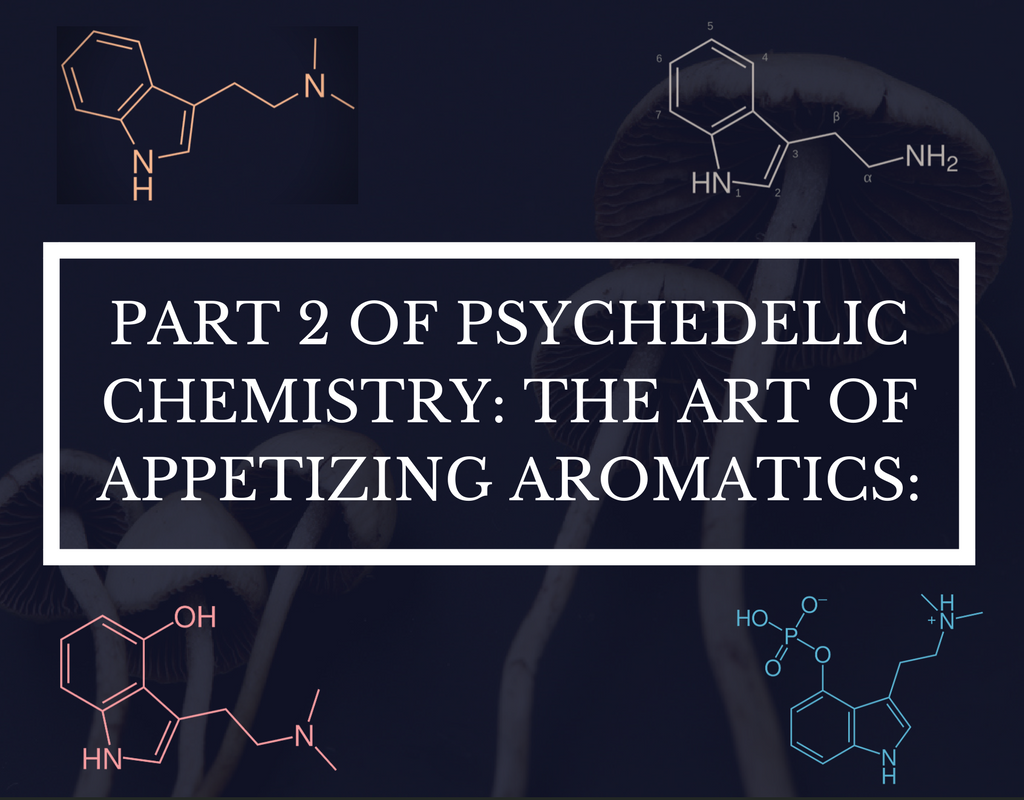 This is the second article in a series on psychedelic chemistry. In the previous article, I introduced the tryptamine class of psychedelics, and we discussed five well-known examples: DMT, 5-MeO-DMT, bufotenine, psilocybin, and psilocin. While the latter two, primary psychedelic constituents of Psilocybe mushrooms (Figure 1), are orally active, neither DMT, 5-MeO-DMT, nor bufotenine are. In this article we will explore two types of alterations that synthetic chemists can make to those molecules to bestow oral activity upon them. These alterations lead to the psychedelic tryptamine analogs (“research chemicals”): AMT (Indopan), MiPT, DiPT, 5-MeO-aMT (Alpha-O), 5-MeO-MiPT (Moxy), and 5-MeO-DiPT (Foxy Methoxy). 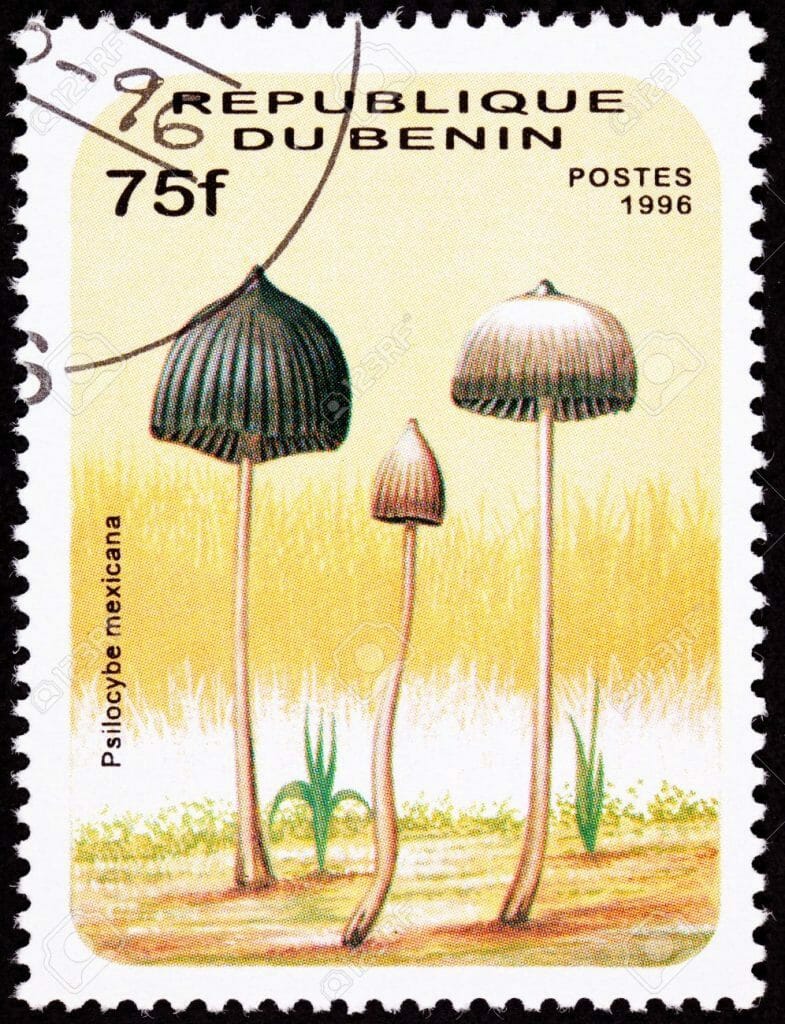 L-monoamine oxidase (MAO) is a family of enzymes that catalyze the oxidation of monoamines. Monoamines contain a single amine connected to an aromatic ring via a 2-carbon chain, and include neurotransmitters such as serotonin and norepinephrine, as well tryptamines (Figure 2) such as DMT, 5-MeO-DMT, and bufotenin. The reason therefore that these compounds are not active after being consuming orally is because once they enter one’s gut they are inactivated by MAO. 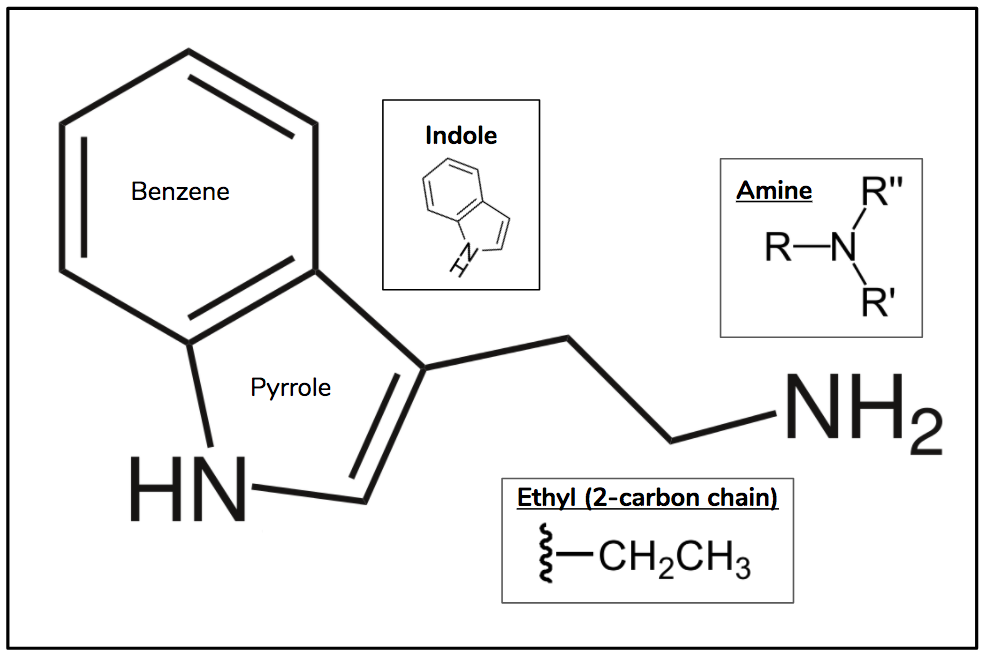 If you want to experience the psychedelic effects of these compounds there are two basic strategies. The first is to use a route of administration that bypasses the gut. Smoking and vaporizing are by far the most common ways to achieve this, but are also the most intense (rapid onset) and shortest-lasting methods. Accordingly, some people favour other non-oral routes such as sublingual (under the tongue), insufflation (in the nasal passage), and rectal administration. Each of these administration routes has its own set of unique pharmacokinetic properties that may be favoured by certain people depending on the context and/or intention. Different strokes for different folks.

But that applies equally to oral delivery, which is unsurpassed in terms of its simplicity (swallow and then you’re done), ease (no thumbing around the butthole or snorting fiery salts up your schnoz), and duration. Except for transdermal delivery, which is technologically complex and has severe restrictions on what can be administered, oral delivery is the longest lasting. Hence its popularity for journeyers that wish to go in deep. So even with a number of non-oral administration routes available, there is still good reason to utilize the oral route.

How to do so if we all walk around with an enzyme in our belly that will deactivate the psychedelic? Simple – consume another compound, called a monoamine oxidase inhibitor (MAOI), that will deactivate that enzyme. Ayahuasca is a prime example of this, though there are a number idiosyncratic formulas of the brew, in essence, it is based on two core ingredients (Figure 3). One contains DMT, the most common being chacruna (Psychotria viridis), and the other contains the MAOI, which is always the ayahuasca vine (Banisteriopsis caapi). 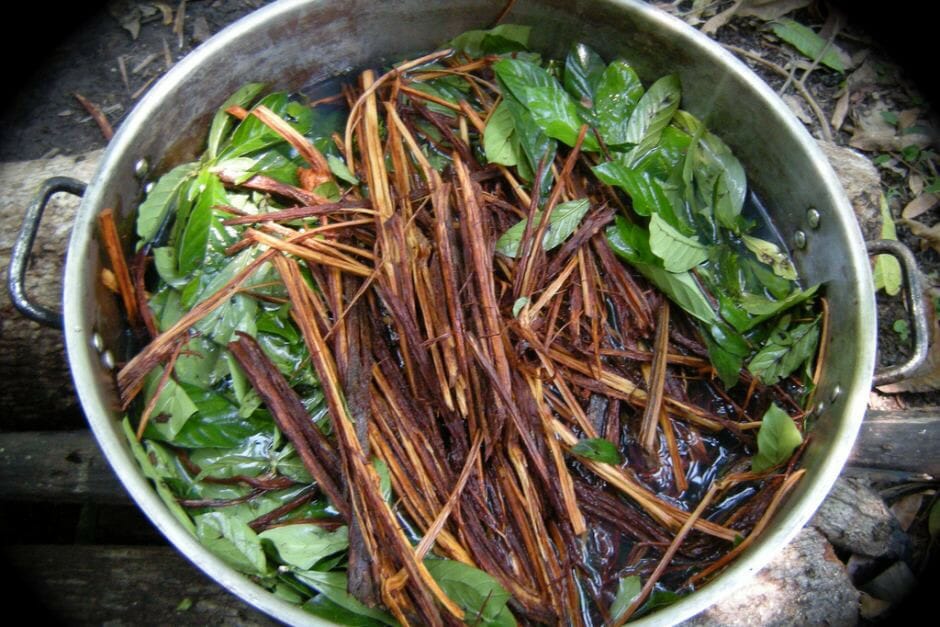 Figure 3. A pot filled with chacruna leaves containing DMT, as well woody material from the ayahuasca vine containing harmine, tetrahydroharmine, and harmaline (MAOI’s). The former provides the visionary punch, the latter ensures that DMT is not broken down in the gut and is able to enter the blood plasma unchanged.

Synthetic chemists love to ask “what if” questions. Like “what if” I make this simple change to the molecular nature of the compound, how does that then affect its properties? These type of questions are explored not only in the name of scientific curiosity, but also because studying how simple changes affect the properties of compounds informs us about its structure-activity relationship, as well provide intimations of what the target receptor looks and behaves like. To the specific question of whether or not a simple alteration to DMT/5-MeO-DMT can actuate oral activity chemists have thus far provided two answers –  α-methylation (Figure 4) and N-alkylation (Figure 6).

As we covered previously, DMT is a tryptamine molecule with two methyls at the N-position. So what would happen if, instead of adding two methyls to the N-position of the tryptamine, we added a single methyl to the alpha-position? This yields AMT (alpha-methyltryptamine; Figure 5), a molecule originally developed in the ‘60s by a Michigan-based pharmaceutical company called Upjohn and which was prescribed in the USSR as an antidepressant. It is at once psychedelic, entactogenic (like MDA/MDMA), and a stimulant with an oral dose typically lasting upwards of 12 hours.

The same goes for 5-MeO-tryptamine (mexamine) – if instead of adding two methyls to the N-position to form 5-MeO-DMT we add a single methyl to the alpha-position, we get 5-MeO-AMT – 5-methoxy-alpha-methyltryptamine (Figure 5). This orally-active and potent psychedelic, commonly known as ‘Alpha-O’, is sometimes peddled as faux-LSD. This is problematic as, unlike LSD with no known lethal toxicity, 5-MeO-AMT has lead to deaths at fairly low doses. It’s not a War on Drugs, it’s a War on People.

With both AMT and 5-MeO-AMT there is a chiral centre at the alpha-position. Attaching a single methyl to the alpha position potentially yields either an S- or R-configuration. Both are psychoactive, both orally active, but work by Dr. David Nichols lab has found that the S-enantiomer is more potent. 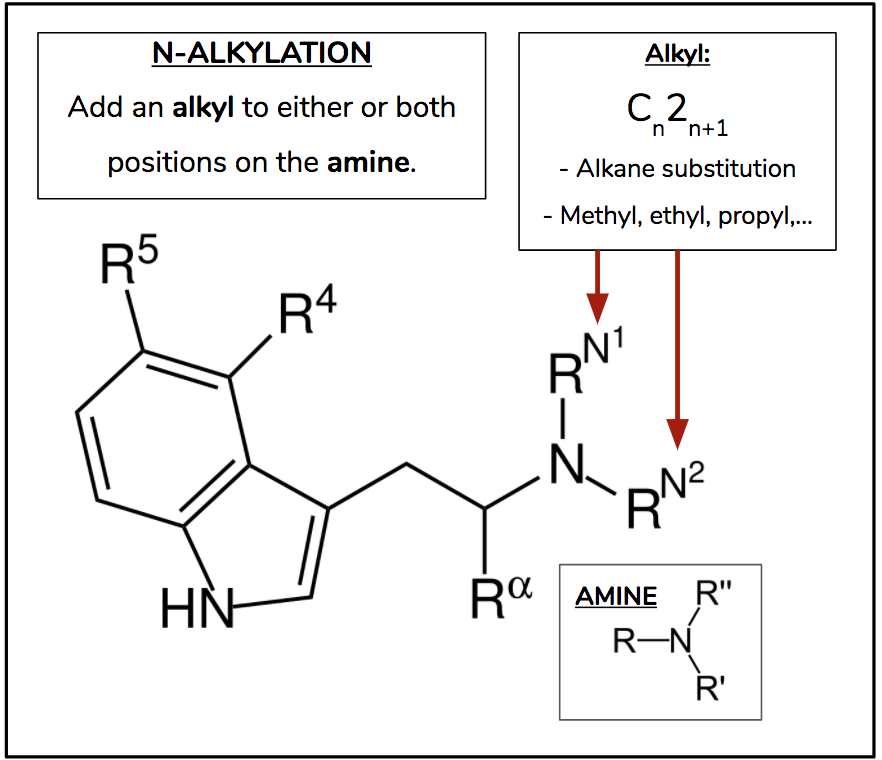 With N-alkylation we manipulate DMT and 5-MeO-DMT as the departure point to realize oral activity. Both these molecules possess two methyls on the amine nitrogen. Work again by Dr. Nichols’ lab has found that if you replace one, or both, these methyls with isopropyl, the molecule becomes orally active (Figure 7). 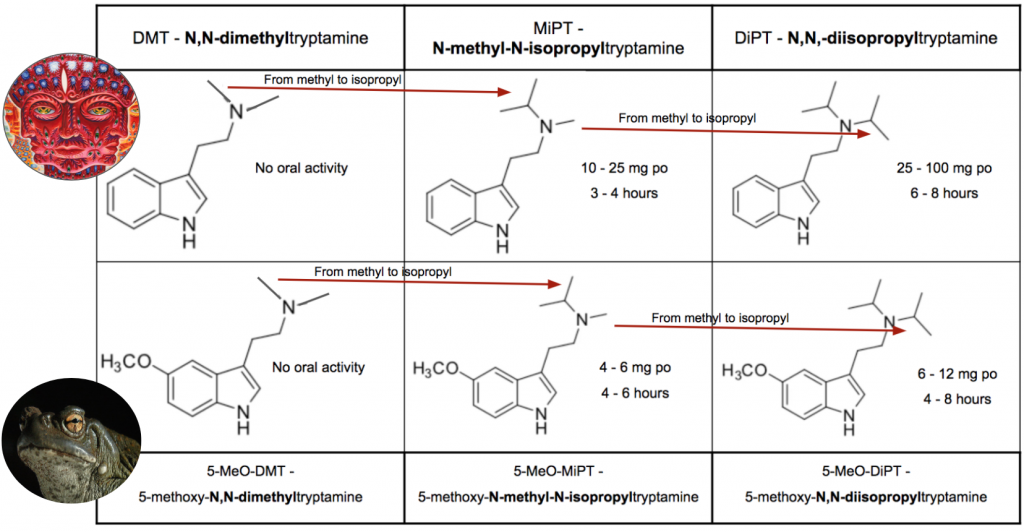 In the case of DMT, if a single methyl is replaced by an isopropyl it results in MiPT (N-methyl-N-isopropyltryptamine), an obscure psychedelic with indistinct effects first introduced to the world in TiHKAL. In the case of 5-MeO-DMT, the same single substitution results in 5-MeO-MiPT (5-methoxy-N-methyl-N-isopropyltryptamine). Commonly known as “Moxy”, it is an extremely potent (4 to 6 mg p.o.) psychedelic with stimulating properties.

As my articles on chemistry are intended for the general reader, I just want to take a brief moment here to remind you that the reason I always write out the substitutive name of each compound is because it describes the actual molecule. If we know the substitutive name, we can draw the molecule, and vice-versa. Let’s briefly review this by using Moxy as an example (Figure 8), but please feel free to skip over to the next paragraph if this is old news for you by now. Starting from back we have tryptamine, so our “foundational” structure is an indole ring with an ethylchain at 3 which connects to an amine group (blue). Then we start from the front – at position 5 we have a methoxygroup (green), at N1 we have a methyl (fuschia), and then at N2 we have an isopropyl (red). 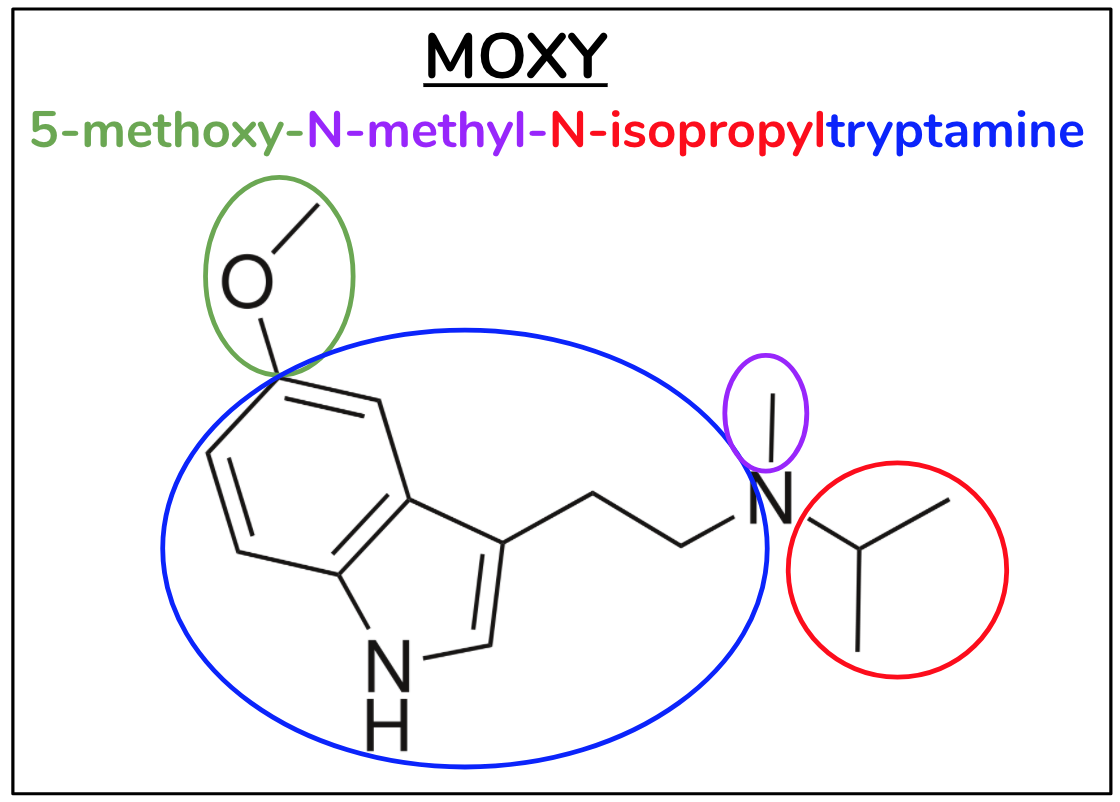 If both methyls are substituted by isopropyl, in the case of DMT the result is DiPT (N,N-diisopropyltryptamine), another bizarre creation of Sasha that primarily produces audial distortions. With 5-MeO-DMT the double substitution leads to 5-MeO-DiPT (5-methoxy-N,N-diisopropyltryptamine) which likely has the most endearing street name of any psychedelic – “foxy methoxy”. Note that in both cases, though making the additional isopropyl substitution retains oral activity, it decreases potency.

So why is it that in both the case of DMT and 5-MeO-DMT replacing a methyl with a slightly larger and more complex compound makes it impervious to deamination by MAO thereby giving it oral activity? To give us a clue we need to look at the nitrogen in the amine group – Figure 9. In order for MAO to deaminate a molecule, it needs to access the lone electron pair of electrons (blue) on the nitrogen. A change in the molecule, such as substituting functional groups, changes its 3D-conformation. In the case of substituting a methyl with an isopropyl group on the amine, it changes the molecule’s 3D shape in such a way that shields the lone pair of electrons from MAO, thus giving it oral activity. 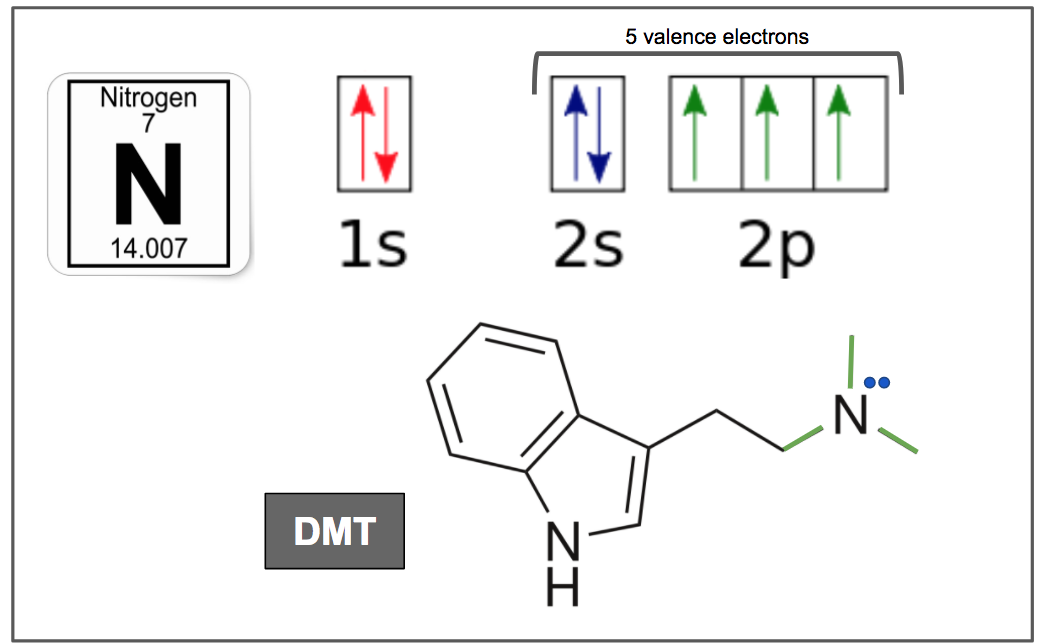 Figure 9. Nitrogen has 7 electrons in total, and 5 valence electrons. It has one electron in each of the three 2p orbitals, which allow it to make three bonds (green), and two electrons in the 2s orbital which exists as a lone electron pair (blue).

How do we know this is the case that it’s the molecule’s 3D shape that protects the lone pair from attack by the MAO and thus allows it to retain oral activity? Earlier in this article, I said that MAO breaks down tryptamines. We then spoke about DMT and 5-MeO-DMT, but what about psilocybin and psilocin? They are naturally-occurring tryptamines, yet they are also orally active – how so? Pioneering work by Dr. David Nichols in the ‘80s using NMR spectroscopy showed that the fact that psilocin has a substitution at position 4 and not 5 (as with DMT/5-MeO-DMT) causes a critical change in the molecule’s 3D structure which ensures the compound is orally active. This study and all the profound implications for psychedelic chemistry gleamed from it will be the topic of our next article.

If it is your intention to consume DMT, and especially 5-MeO-DMT, orally by combining it with an MAOI  please do your homework. And once you’ve done your calculations, double-check them. Terence McKenna used to quip that the only real danger with DMT is “death by astonishment”. Though that is the case for smoking it, overdoing orally-administered DMT/5-MeO-DMT can lead to serotonin shock, convulsions, and in some cases, death. The Psychedelic Ship is leaving the harbour, please don’t drop any cannonballs on the deck.

Faan Rossouw was born and raised in Cape Town (South Africa) and currently resides in Montreal (Canada). He holds a MSc in Plant Science, and is the co-founder and Chief Strategy Officer of Indeeva Biomedical, a medical cannabis company that focuses on producing condition-specific cannabinoid therapeutics. Faan possesses theoretical expertise and practical experience in biological production systems, natural and pharmaceutical product development, phytochemistry, and psychopharmacology. Though his background is rooted in science he is most passionate about, and thrives in, the intersection of science, the humanities, and commerce. He is interested in how we can leverage the properties of the new global economy to develop superior and sustainable therapeutic solutions. In his free time he loves to practice Brazilian Jiu Jitsu, spend time in nature with his partner Robyn, or kick back in his lazy boy with a book, a cup of pu-erh tea and his cat Luna.