An Introduction to Psychedelic Tryptamine Chemistry 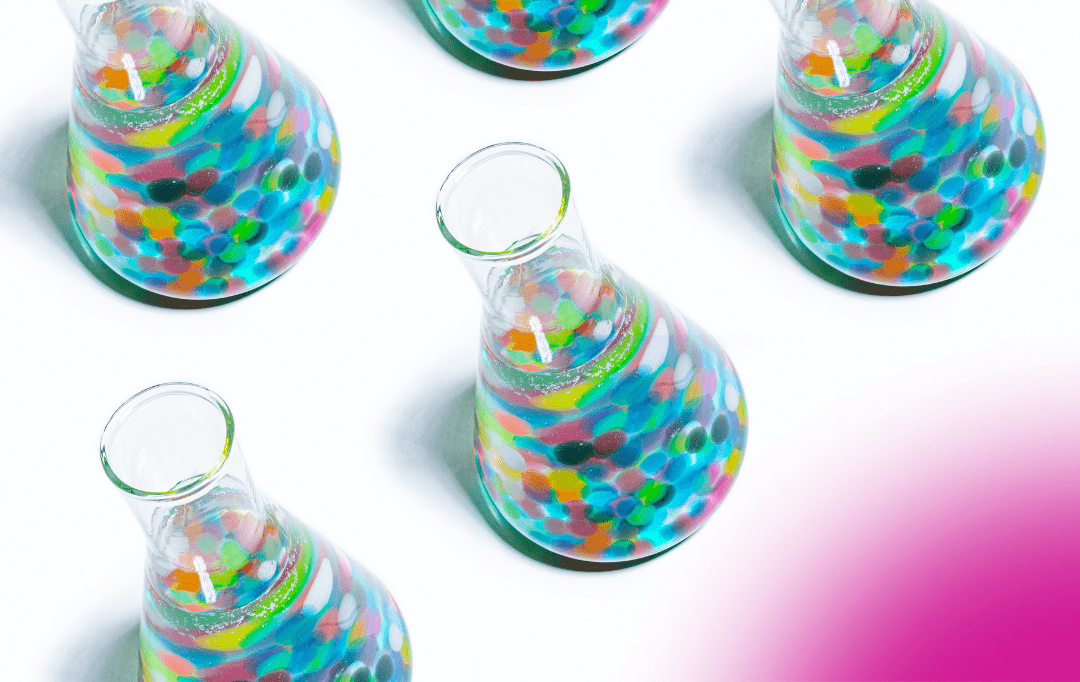 The ensuing series of articles are intended for the general reader that, like myself, have an appreciation for the beauty of chemistry, and/or desire to learn more about it. That being the case I am going to be pedantic throughout the articles, deconstructing technical terms and “dirty pictures”* with the assumption that you do not know what they mean. That way we can learn them as we go along. If you are already fluent in Chemistrian, it goes without saying that you are free to skip over these and peruse selectively. This first article is an introductory exploration of the tryptamine class, and will be followed by further forays into other interesting aspects related specifically to this class before I move on to the others. Enjoy.

The Three Main Classes of Psychedelics 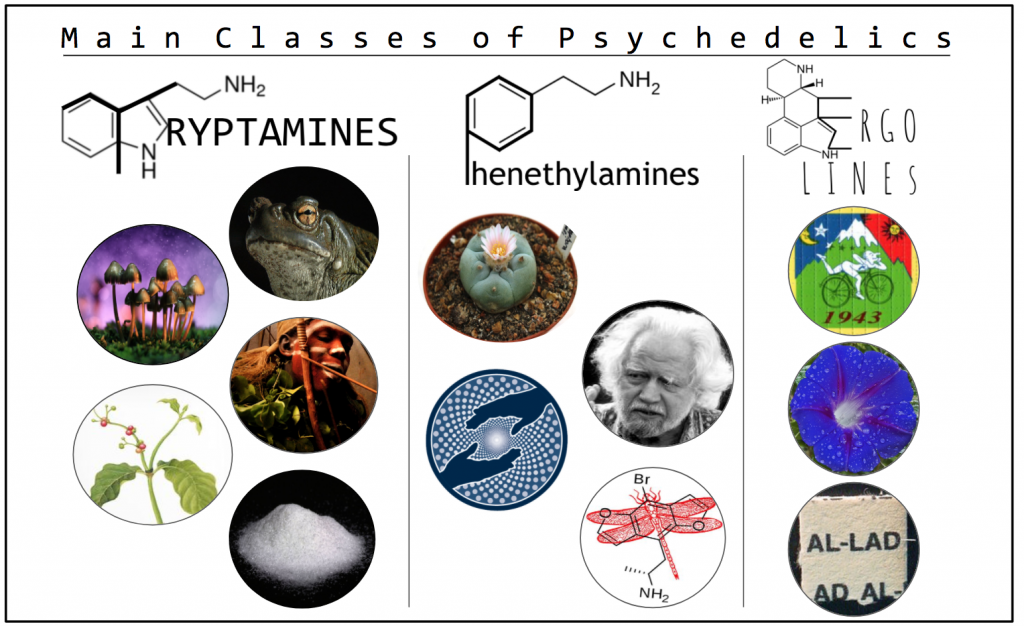 Psychedelics of this class are all derived from tryptamine (Figure 2), a ubiquitous endogenous ligand and agonist of the human trace amine-associated receptor 1 (TAAR1). The name tryptamine is derived from its structural similarity to l-tryptophan (Figure 3), an essential amino acid and the precursor to both serotonin and melatonin. 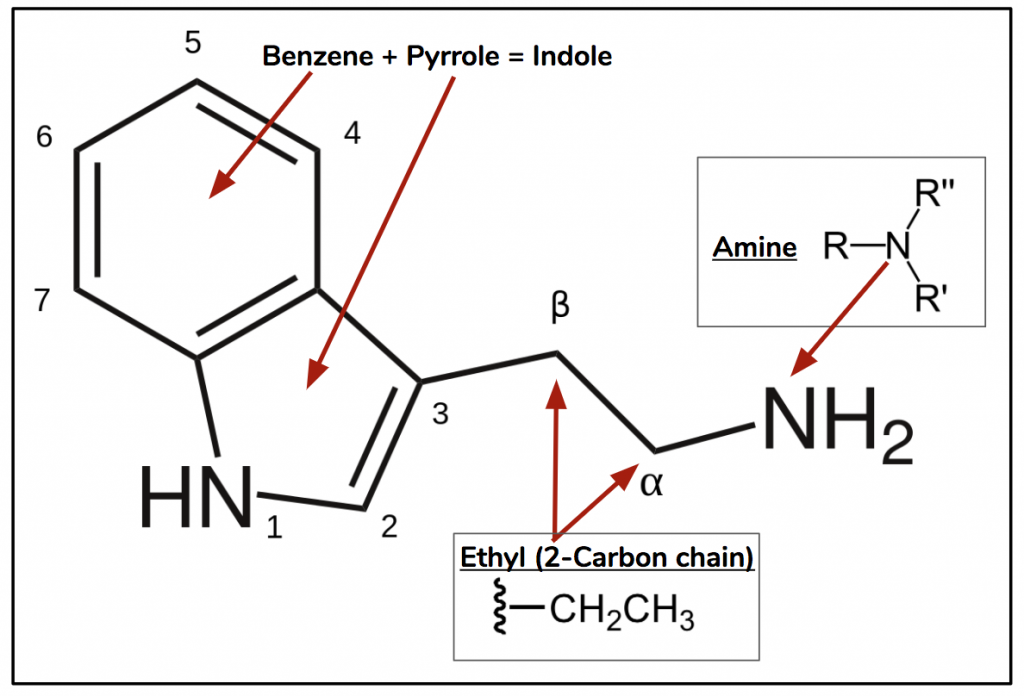 Figure 2. Tryptamine consists of an indole ring connected to an amine through an ethyl attached to position 3.

Although the “template” for psychedelics tryptamines is the molecule with all the various positions presented in Figure 2, in actuality, there are limitations to how this manifests in psychedelic compounds. This is either because certain modifications are either difficult to impossible, or they lead to inactive compounds. An example of this is if something is attached to position 2 (Figure 2) the compound becomes a serotonin-2A receptor antagonist therefor losing its psychoactivity. Based on these restrictions we can simplify the template presented in Figure 2 to Figure 4, which is called the ‘substituted tryptamine’. The three main changes that synthetic chemists can make to derive psychedelic analogs is derived from this figure. 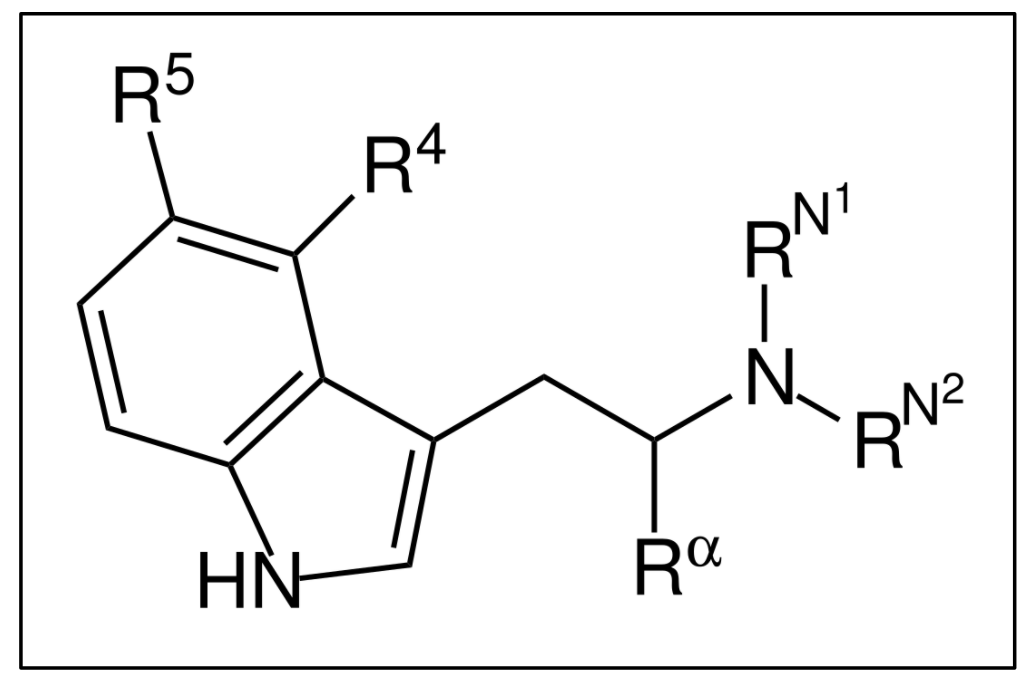 The second major change that can be made is a substitution at the α-position. Chemists can methylate (add a methyl group) the alpha-position to change a non-orally active species into one with orally active. We will explore this in full detail in the next article.

The final feasible change is adding sidechains to positions N1 or N2. All five of the major naturally-occurring species we have discussed thus far possess methyls at both positions (hence “dimethyl” from which the DM in DMT is derived – more below). These methyls may be substituted with more complex alkyls, another way in which chemists can turn non-orally active tryptamines into orally active species.

Now that we have an idea of the chemical “archetype” of tryptamine psychedelics and the possible changes chemists can make, let’s have a look at the five most well-known naturally-occurring examples: DMT, 5-MeO-DMT, bufotenin, psilocybin, and psilocin.

The substitutive name for DMT is N,N-dimethyltryptamine. One of the most magical parts of learning chemical language is that from it one can deduce what they actual molecule looks like, and vice-versa. Let’s explore that using DMT as an example. Starting from the back we have tryptamine (blue), so we know that is the foundation of our molecule – the indole ring with an ethyl in position 3 attaching to an amine. Then we have “dimethyl” (red), meaning two methyls. Okay so now we know it’s the tryptamine molecule that has two methyls added to it. And where are these two methyls? They’re both positioned on the nitrogen of the amine, hence ‘N,N’. 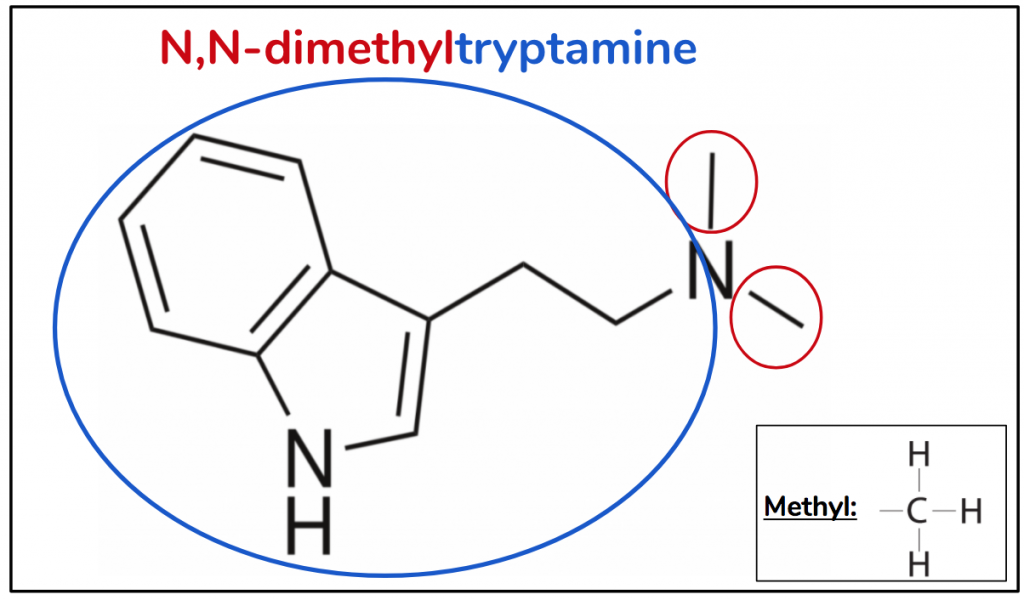 What’s interesting about N,N-dimethyltryptamine is that it forms the foundation for all four other compounds we are going to discuss. In other words, all four of them are N,N-DMT with a little something extra. We can see that because the term is contained within the substitutive name of all four other molecules. Let’s have a look.

The substitutive name for 5-MeO-DMT is 5-methoxy-N,N-dimethyltryptamine (Figure 6). We can see that it has the whole name of DMT in it, so when we draw it we know we can start with that molecule – a tryptamine with two methyls on the amine (red and blue). What’s left is ‘5-methoxy’, which means that at position 5 we have a methoxy (green). A methoxy is a combination of a methyl and an oxygen – hence the name. 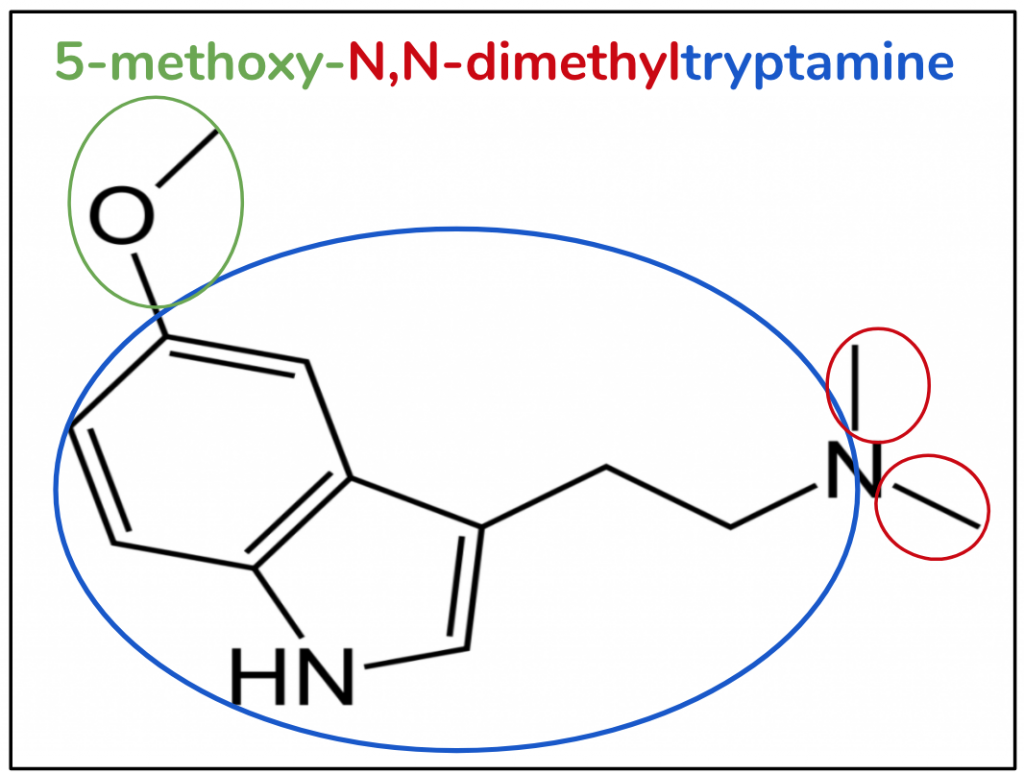 The substitutive name for bufotenin is 5-hydroxy-N,N-dimethyltryptamine (Figure 7). As was the case with 5-MeO-DMT, the molecule has DMT as a starting point (red and blue). But this time, instead of a methoxy at position five, we have a hydroxy, -OH (green). 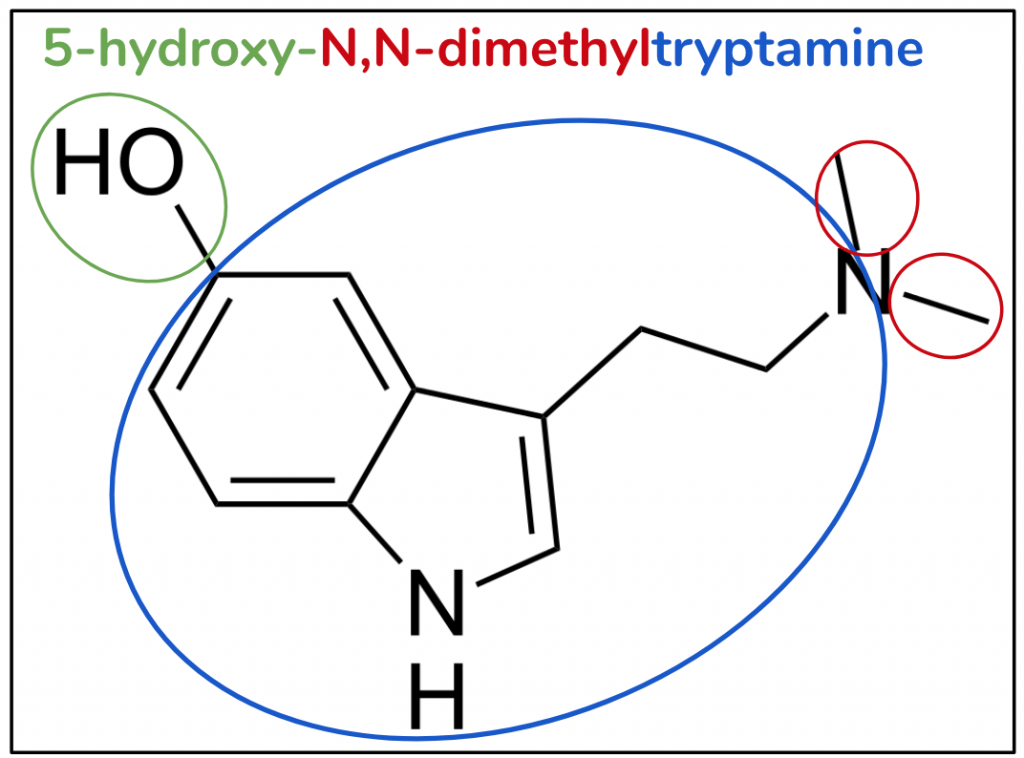 The substitutive name for psilocin is 4-hydroxy-N,N-dimethyltryptamine (Figure 8). Same story, it starts with the structure of DMT (red and blue). If we compare them, we can see the psilocin is extremely similar to bufotenin, the only difference being where bufotenin had the hydroxy at position 5, here it’s at position 4 (green). In a future article we will learn why this small change is crucial to ensure that psilocin, unlike bufotenin, is an orally active species. 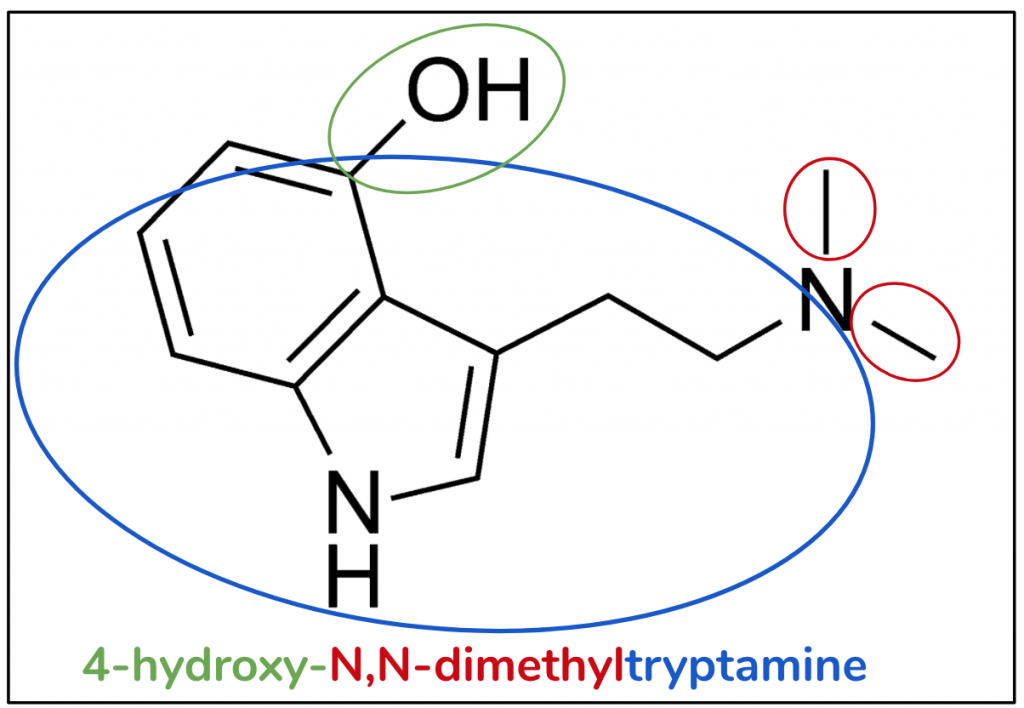 The substitutive name for psilocybin is 4-phosphoryloxy-N,N-dimethyltryptamine (Figure 9). By now I’m sure you’ve grokked it – it’s a DMT molecule (red and blue) with a little something extra. As with it’s cousin psilocin, that something extra is at position 4, but here instead of a hydroxy, it’s a phosphoryloxy with the composition OPO3H2 (green). 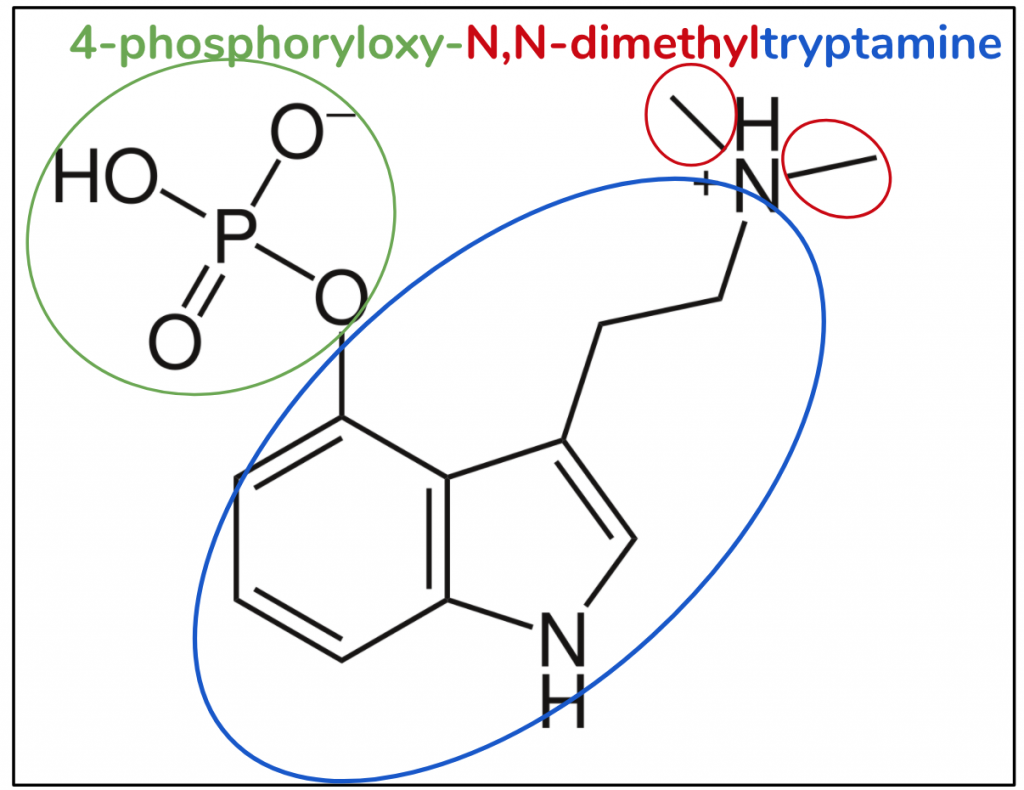 All five molecules and their substitutions are reviewed in Figure 10 below. 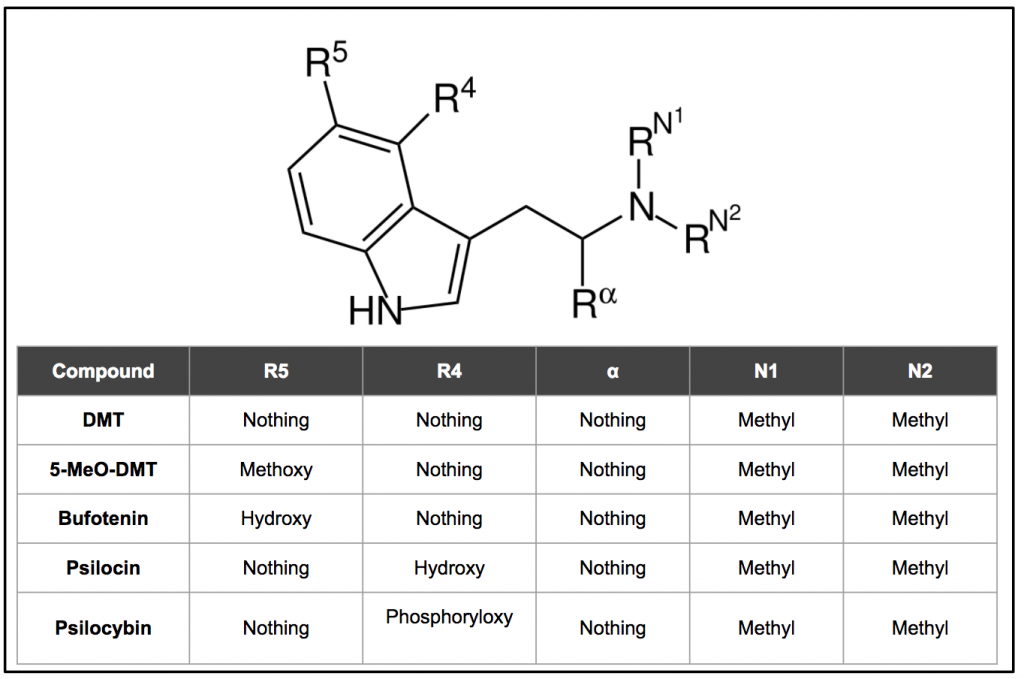 In the next article, we will continue to explore psychedelic tryptamine chemistry by looking at the two changes synthetic chemists can make to DMT and 5-MeO-DMT to make them orally active. 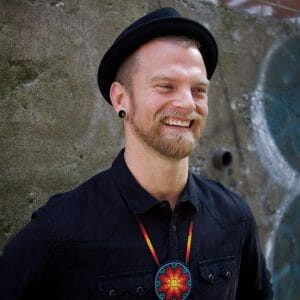 Faan Rossouw was born and raised in Cape Town (South Africa) and currently resides in Montreal (Canada). He holds a MSc in Plant Science, and is the co-founder and Chief Strategy Officer of Indeeva Biomedical, a medical cannabis company that focuses on producing condition-specific cannabinoid therapeutics. Faan possesses theoretical expertise and practical experience in biological production systems, natural and pharmaceutical product development, phytochemistry, and psychopharmacology. Though his background is rooted in science he is most passionate about, and thrives in, the intersection of science, the humanities, and commerce. He is interested in how we can leverage the properties of the new global economy to develop superior and sustainable therapeutic solutions. In his free time he loves to practice Brazilian Jiu Jitsu, spend time in nature with his partner Robyn, or kick back in his lazy boy with a book, a cup of pu-erh tea and his cat Luna.