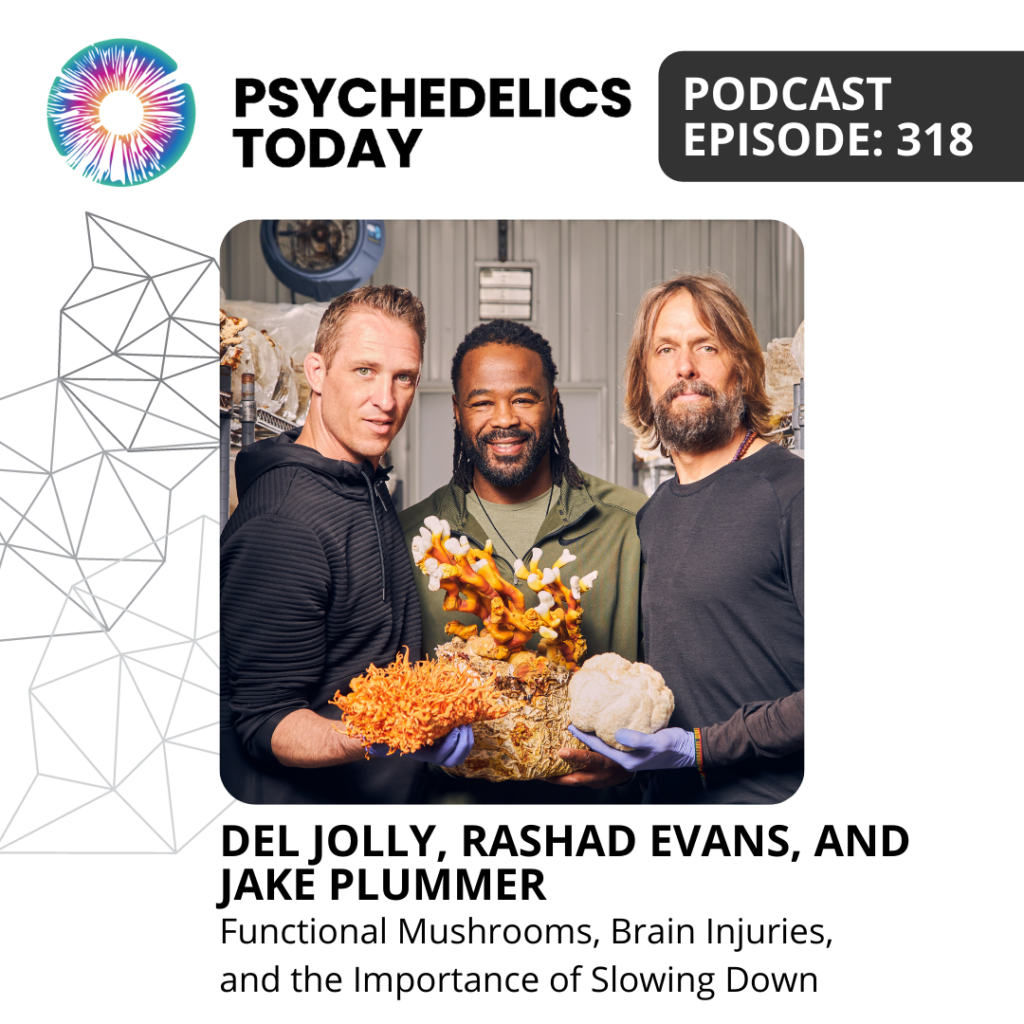 In this episode of the podcast, recorded live from the Archipelago Attic space in Denver, CO, Joe sat down with Unlimited Sciences founder, Del Jolly; Former UFC champion and Hall of Famer, Rashad Evans; and 10-year NFL veteran quarterback, Jake Plummer, at the initial launch of their new functional mushrooms company, Umbo Mushrooms.

Plummer and Evans tell their story of how they met Jolly and transformed from professional athletes to long-haired mycophiles who are now running their own mushroom company; discussing how difficult transitioning back to normal everyday life after a sports career can be, and how CBD, following the Stamet’s stack protocol, and learning about all the anecdotal evidence of brain injury healing started to make them question what kind of long-term issues they may have coming to them (fellow athletes have asked Evans: “Do you feel it?”). Jolly believes that functional mushrooms have just as much, if not more potential to help humanity than the often higher-praised psilocybin.

The four of them talk about a lot more in this nearly 2-hour panel discussion (with audience questions): the power in language and how a diagnosis can be a wall people put up that blocks progress; how valuable it is to learn from each other in group preparation and integration sessions (Evans calls these ceremonies “share-emonies” for this reason); how the UFC and NFL feel about psychedelics; microdosing and competition; NFTs; the Telluride Mushroom Festival; and the problem with TBI often being misdiagnosed as PTSD. And they discuss what steps we can take to better align our communities to the set and setting we want; the importance of slowing down; how every person has a specific audience they can reach; how we can learn from Indigenous people about our lost connection to community; and the interesting question of if we actually feel better from eating mushrooms because as a society, we completely removed them from our diets and our bodies have been craving them ever since.

Umbo Mushrooms has just recently launched and they’re offering a 20% off discount for PT listeners (use code Unlimited20 at checkout). Additionally, if you are planning to use psilocybin outside a research laboratory before July 1st, Unlimited Sciences is running a study to learn more about the positive and/or negative outcomes of using psilocybin in more natural settings. You can participate here.

“As a big advocate for psilocybin in particular, functional mushrooms have just as much, if not more potential to help humanity than psilocybin. I really believe that. And it’s just a matter of time before some eight year old kid is going to come up and say, ‘Oh, that’s the key. Look what I found!’ Boom. ‘Now my Dad really isn’t going to age.’” -Del

“I think tapping into those Indigenous voices – those stories, the history – is very important for the movement because they understood community. And when you look at what are the biggest [ailments] in our society is the fact that we have a broken community. Our communities are broken for the larger part. And finding ways to tap back into that old knowledge of ways we used to be can get us to remember what we are [and] how to be towards each other. I think that we don’t get better as a world until we get better as a community, and I think tapping into those strong Indigenous community roots would help us to be what we could be.” -Rashad

“The world doesn’t need psychedelics. The world needs community and a meditation practice. But psychedelics is the 2×4 that brings you to that awareness.” -Del

“Don’t minimize what your impact is. If you’re Rashad Evans with a platform, [a] Hall of Famer, Jake Plummer, [whoever]… Either you’re that or this. Don’t minimize what it is, because whoever you’re speaking to might be the person who sets it off.” -Del

“I think once you get into the mushrooms, you can’t help but learn more kindness, compassion, and love. It will open your mind. That’s kind of why I said those three words; is if we can keep that in front of everything and also the sacred part of everything… Everything should be a lot more sacred than it is, everything we do. I find myself grabbing food and eating it and then going, ‘Damn, I didn’t even really thank this food for being here.’ We take a lot of things for granted, so I think just starting with that awareness can be a step in the right direction.” -Jake

Mushroomdesign.com: How (and why) cordyceps were mistaken for steroids in the 1993 Olympic Games

The More Beautiful World Our Hearts Know Is Possible, by Charles Eisenstein

Archipelagodenver.com (where this podcast was recorded) 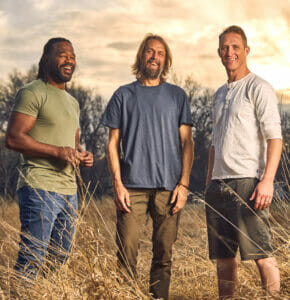 “Suga” Rashad Evans (left) is a former UFC light heavy weight champion and Hall of Famer. He currently is an ESPN analyst for the UFC and Co-Founder of Umbo Mushrooms.

Jake Plummer (center) is a former NFL Pro-bowl quarter back who played 10 years in the league with the Arizona Cardinals and the Denver Broncos. He is now a mycophile who runs Umbo and Mycolove Farms.