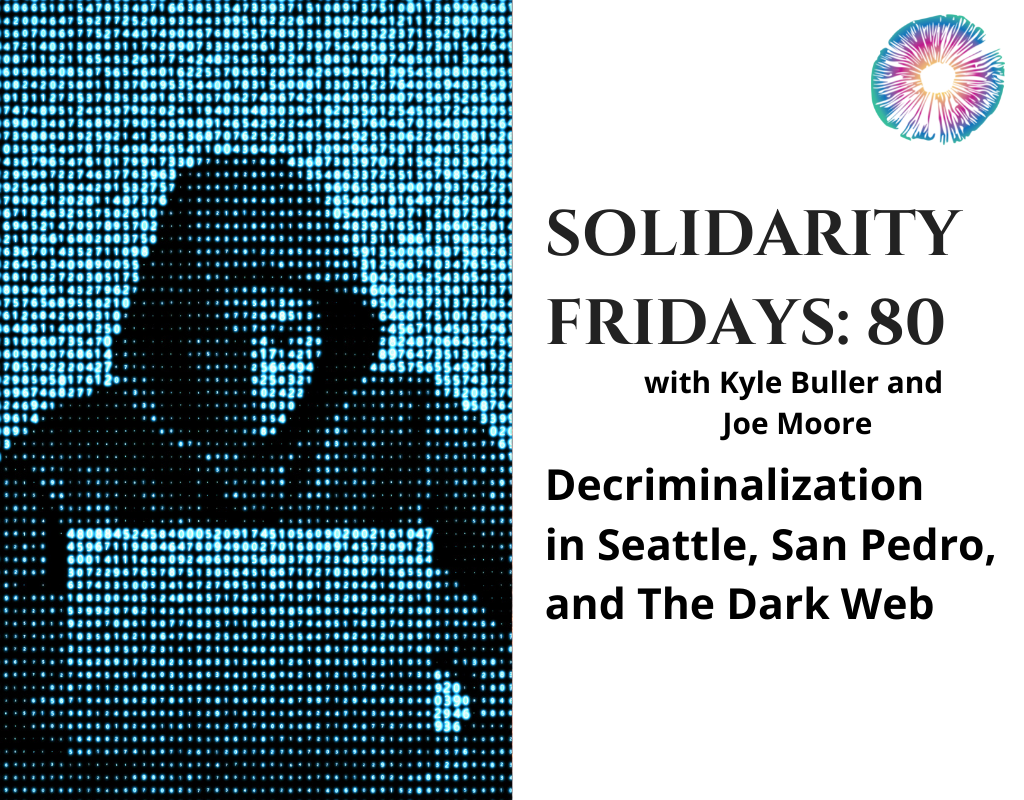 In this week’s Solidarity Fridays episode, Joe is in Pennsylvania, fresh from seeing Kyle in person for the first time in years, and they talk decriminalization, peyote, San Pedro, and the dark web.

They first discuss Seattle’s recent unanimous vote to decriminalize the cultivation and sharing of psilocybin, ayahuasca, and non-peyote-derived mescaline, and then look at the flip side of this win: Santa Cruz removing all mescaline-containing cacti from their decriminalization law put into place two years ago. And they wonder: Is San Pedro actually what could keep many people from eating the more endangered peyote? Is there enough research comparing peyote and San Pedro? And they look at the various opinions on the best way to move forward with this conundrum- could it be massive greenhouses growing as much peyote as possible?

They then talk about the news of dark web marketplace, White House Market, shutting down (or “exit scamming”) and the dark web in general: How it democratizes access to drugs; how huge it is for harm-reduction with its very open, Ebay-esque review system; how crazy it is that something so huge can exist with so few people knowing anything about it; and how these things will never truly go away due to the innovation that comes from prohibition.

They also discuss Joe recently recording with Hamilton Morris, South African quaaludes, Will Smith coming out of the psychedelic closet, the “Operation: Fast and Furious” blunder and the many ways our tax dollars are making cartels richer, Delta-8, and what “legal” really means. And after talking about our new live course offering with Jerry Brown (starting October 26th), Joe attempts to freestyle a commercial for Navigating Psychedelics.

“Black markets are never going away. Prohibition never really works. People are creative enough to always work around it, and prohibition seems to incentivize people so that the stricter the rules, the higher-valued the thing is going to be. So there’s always going to be people breaking laws to smuggle and traffic and create when those things are prohibited.” -Joe

“We [could] disempower large distribution networks by making it more democratic. If we care about cartel violence, if we care about American drug habits, [and] fueling violence and death in Mexico via potentiated cartels with lots of cash, then anything we can do to take power away from them (like publish secrets [and] publish methods) is good. …What do we have, over 100,000 deaths in Mexico related to the drug war in recent past? Is that worth your son not smoking pot or not ever trying cocaine? 100,000 deaths?” -Joe

“Even if we get to legalize-and-regulate, which is where I want it to be, we’re still going to have a fight ahead of us of like, do these laws make sense? Are they optimal for the culture we’re collectively designing? Or do we need to design our own alternate cultures? Perhaps that’s the solution.” -Joe

Psychedelics: Past, Present, and Future course

Hamilton’s Pharmacopeia: The Story of the South African Quaalude

Psychedelicspotlight.com: Will Smith Comes Out of the Psychedelic Closet

University of the Sciences

Narconomics: How to Run a Drug Cartel, by Tom Wainwright

Psychedelics Today: Jerry B. Brown and Tom Hatsis – Christianity and the Psychedelic Mushroom: A Debate