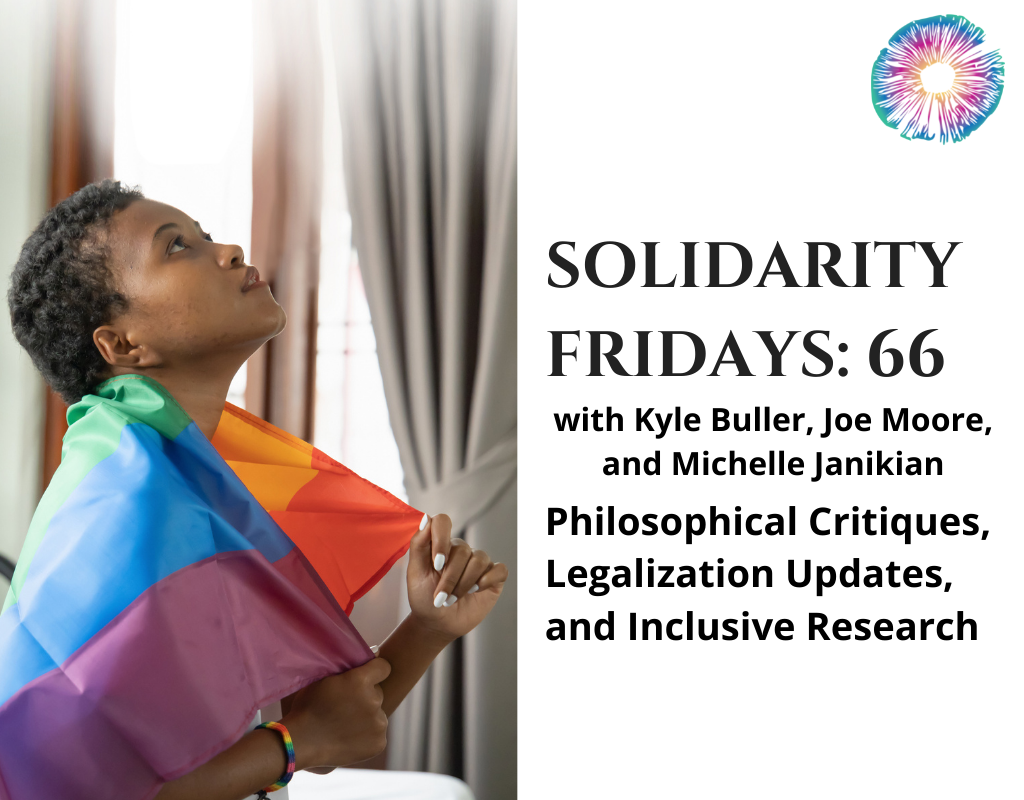 In this week’s Solidarity Friday episode, Joe, Michelle, and Kyle talk about the importance of critiquing established systems, give several legalization updates, and discuss inclusivity in therapy and research.

They first review an email from a listener who took issue with some of the points in Matt Ball’s episode and much of Joe’s continued open discussion of his illegal drug use. This leads to a discussion on ethics (professional vs. virtue-based and why there’s even a difference), how psychedelics are challenging perceptions, how psychology is used as a weapon, privilege, the need for more frameworks, the concept of licensure equating to knowledge, the need to be open about drug use, and more. And Joe has learned to not read email right before going to bed.

They then discuss updates on legalization: Mexico decriminalizing cannabis, Scott Weiner’s Senate Bill 519 making more progress in California, the Oregon psilocybin board being right on track for their legalization timeline, and Connecticut becoming the 18th state to legalize cannabis (with records expunged and, among other things, the ability to have 1.5 ounces in public and another 5 at home!). They also discuss the Canadian government funding Toronto-based Braxia Scientific in a ketamine trial for bipolar depression, and an article talking about the need to include more queer and non-binary people in clinical trials (and encourage people who aren’t straight and white to enter into therapeutic fields for the comfort of people like them).

“Helping decrease stigma through storytelling, I believe, is crucial. And I think that’s a big portion of why we’re here doing this show. How many of my drug experiences have been legal? I don’t know, I don’t think very many. I’m not going to go ahead and pretend that I went to the Amazon. I’m not going to lie to you. I just think it’s important to show that hey, these laws are unjust, I’m justified in breaking these laws, and I’m going to continue to do it.” -Joe

“I think maybe folks who think they identify as hetero; when they go into psychedelic experiences, they might realize that they’re suppressing some attraction to the same gender, [or] maybe they don’t identify as the gender they were born in. Stuff like that happens. And do we have the training and the sensitivity to help folks deal with that? I think the answer is: Not yet.” -Michelle

“There’s a lot of people who the medical system is not appropriate for, unfortunately. And is it their fault? Not necessarily. It could be racial trauma, it could be a lot of other factors going on. If you understand the history of medicine and a lot of the abuses in psychiatry, you will begin to understand why many folks have reticence of using the system.” -Joe

“Coming back to this topic that we’ve talked about over and over again about a mad society or sick society; ok, we’ve had these really powerful experiences so we go back and try to fit it into this mold that doesn’t seem to be working, or do we take this and try to do something else with it? Why do we always have to integrate back into society to some degree? If society is sick, why do I want to go back to that sick environment?” -Kyle

“I saw John Mayer wearing a peyote t-shirt on his Instagram the other day. That can’t be a good sign.” -Joe

Physics of the World-Soul: Whitehead’s Adventure in Cosmology, by Matthew T. Segall

Chacruna.net: The Revolution Will Not Be Psychologized: Psychedelics’ Potential for Systemic Change

Truffle.report: Oregon Psilocybin Board On Track To Meet Timeline Goals