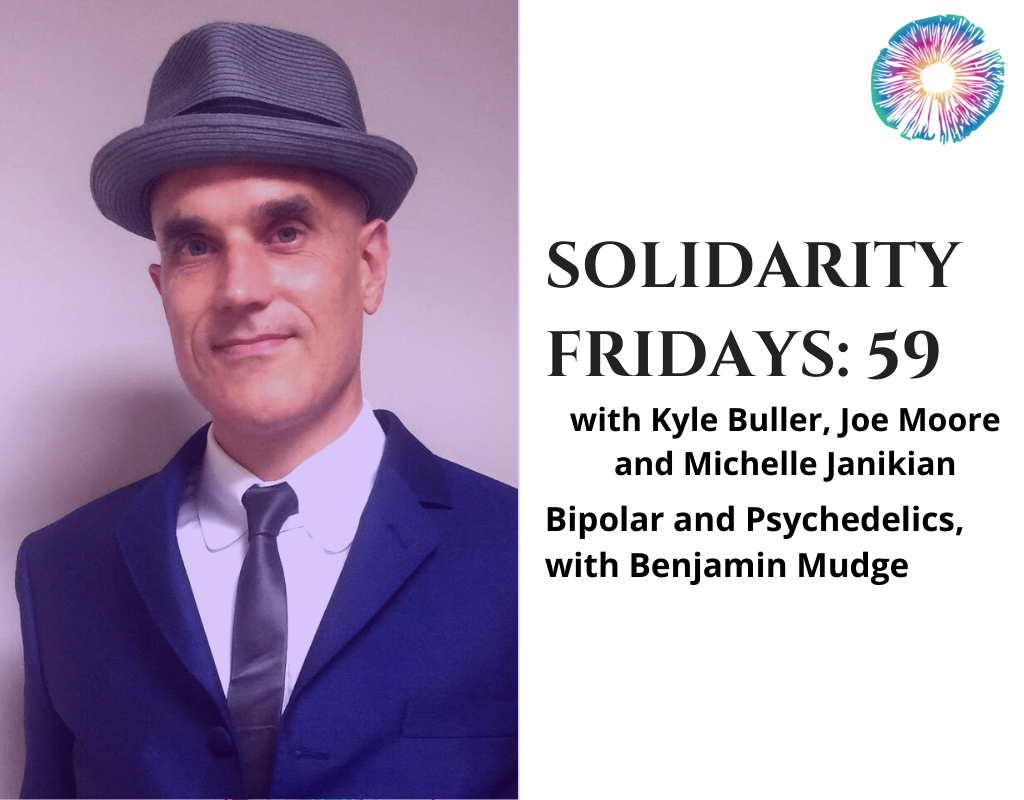 In this week’s Solidarity Fridays episode, Michelle, Kyle, and Joe welcome Benjamin Mudge to talk about psychedelics and bipolar disorder, and although there was an intention to also cover some news, the bipolar topic turned out to be quite interesting- so much so that there will need to be a part 2 of this episode in the future.

In this week’s Solidarity Fridays episode, Michelle, Kyle, and Joe welcome Benjamin Mudge to talk about psychedelics and bipolar disorder, and although there was an intention to also cover some news, the bipolar topic turned out to be quite interesting- so much so that there will need to be a part 2 of this episode in the future.

Mudge, a Ph.D. candidate and Director of the Bipolar Disorder CIC, talks about his own journey of living with bipolar disorder, and how it was ayahuasca that got him off pharmaceutical drugs and to a place of self-awareness and balance he never experienced before. He discusses the taboo against bipolar people and how keeping them out of research studies out of fear for their safety is actually more dangerous to them, and how ayahuasca on its own (and in the correct setting and proportion) could actually be a very safe solution. He talks about how ayahuasca has been a scapegoat, the many factors that come into play to determine its strength and efficacy, institutional ethics, mania triggers, the effects of antidepressants, and how bipolar people are “quantificationly challenged.”

Mudge is working to become an ayahuasca facilitator, collaborating with researchers to determine the best ayahuasca component ratio, pushing to get more bipolar people in more studies, and his biggest project: creating a safe protocol for bipolar people to engage in ayahuasca ceremonies so that they can experience the peace he has.

“I was prescribed the wrong antidepressant and became manic psychotic, got locked in a hospital, and went on a journey through the mainstream psychiatric system, tried 17 different prescription pharmaceutical drugs, …I left psychiatry, tried to figure out my own way, tried a bunch of herbs from herbalists and Chinese doctors- they didn’t work. And then 15 years ago, I discovered ayahuasca, and I’ve been off psychiatric pharmaceutical drugs ever since then.”

“The contraindication status is not logical, and it’s functioning more like a cultural taboo in our community than it is an evidence-based medical fact. And by the contraindication and the exclusion of bipolar people from the clinical trials, from the ayahuasca retreat centers and so on and so on- that is an attempt to ‘do no harm,’ but doing nothing when you’ve got a suicidal population does not equal ‘no harm.’”

“Excuse me, but can anyone actually give me a logical reason why one peer of one minority group who has superior understanding than the rest of the population about what this other bipolar person is going through, knows how to help them, and actually has some experimental treatment medicine- can anyone actually give me a logical, ethical reason why those bipolar people can’t get together and help each other out?”

“There is a role for mainstream psychiatric pharmaceutical drugs. They can definitely play a role in stabilizing someone, [but] the question is, does that really have to go on for their whole life? Or once they’ve got their life together and done some therapy, can they have a lower dose or have them less often, or come off them, or use a psychedelic or whatever? That’s not something that the profit margin and that big pharma wants to consider at this point. But I think the humans deserve it.”

Psychedelics Today: Bipolar and Psychedelics: An Investigation into the Potential and Risks 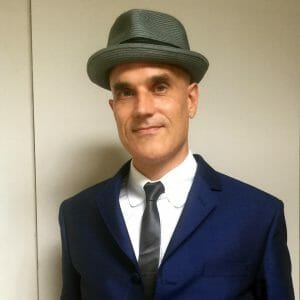 Benjamin Mudge has a background in music, art and political activism, and is now a PhD candidate in the Psychiatry Department at Flinders University, as well as Director of Bipolar Disorder CIC. He taught himself the science of bipolar disorder, while working at Neuroscience laboratories and GlaxoSmithKline, to be able to manage his own personal experience of manic depression. After psychiatrists prescribed him 17 different pharmaceuticals (all of which were problematic), he gave up on pharmaceutical psychiatry and decided to find his own solution to living with manic depression. He has been managing his bipolar disorder with ayahuasca for 14 years – without any need of pharmaceuticals – and was awarded a PhD scholarship to research whether his personal protocol could assist other bipolar people. His future vision is to make ayahuasca ceremonies available to bipolar people as an alternative treatment to pharmaceutical drugs.