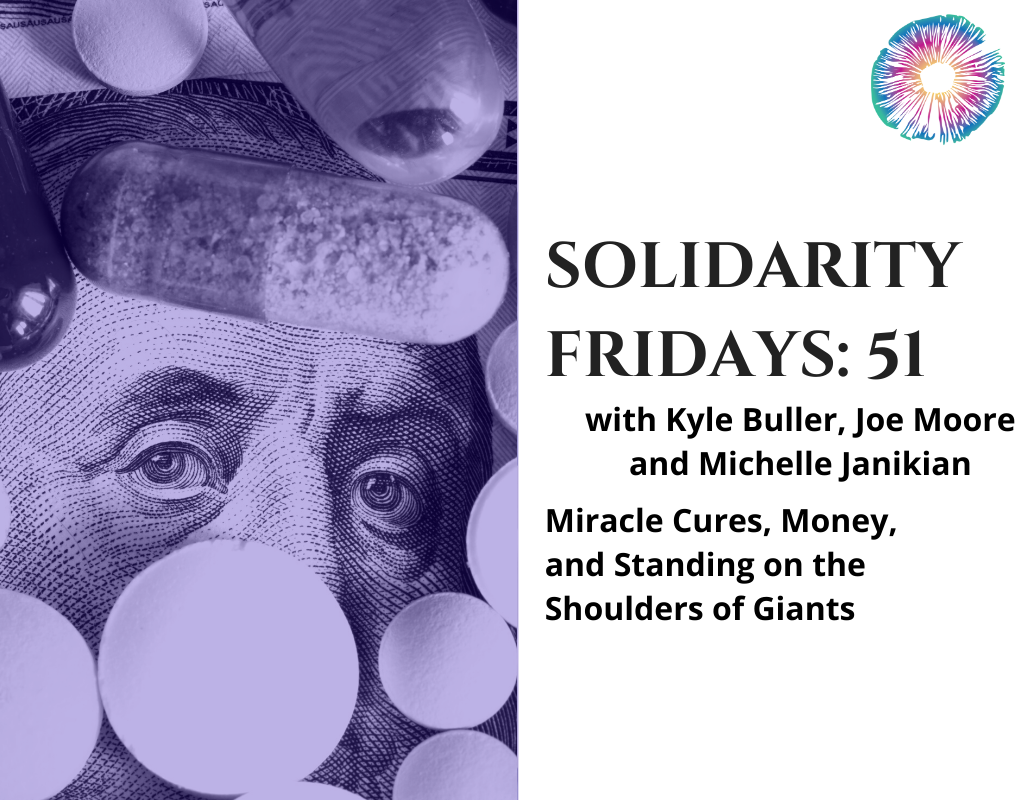 In this week’s Solidarity Fridays episode, Kyle, Joe, and Michelle first discuss an article from Salon.com that illustrates the flaws behind psychedelics being continually hailed as a miracle cure: has everyone just replaced the oft-criticized model of selling a “miracle” pill with selling the narrative that a few psychedelic sessions can cure anything? And inspired by Lenny Gibson, they point out that this rabid focus on medicalization is a direct result of these substances being made illegal in the first place. What would things look like if that had never happened?

They then cover the developing drama between Compass Pathways and seemingly anyone compassionate and not making money from Compass Pathways’ seedy behavior, represented this week by Tim Ferriss and David Bronner. The latest update includes Compass co-founder Christian Angermayer calling Ferriss’ millions in donations a “drop in the ocean” in an odd donations-measuring contest, an email sent to investors saying competitors will never be able to bring a product to market due to the (absurd) patents they’ve filed (which Angermayer actually defended), and co-founder and CEO George Goldsmith mobilizing opposition to Oregon’s Measure 109.

This, not surprisingly, leads to a discussion about the competition between corporations, the race for patents, the drug war, how companies overestimate costs of drug-research and potential loss, how so little of the money being made is going to the Indigenous cultures we got all of this knowledge from, and more fun stuff in the endless mire of bullshit we have to wade through as a result of the drug war and greed.

“The only reason why we need to get this medicalized is because we made it illegal and we put it on a scheduling system. So, to make it official and legit and to deschedule it to make it into a medicine, we have to go through FDA-approval. …What if it was never made illegal to begin with?” -Kyle (inspired by Lenny Gibson)

“We’re not trying to be the enemy, but please be open to critique and understand where we’re coming from. In the same way a white male in America needs to understand American history and Imperialism and the crazy shit we’ve done, medicine should also try to own that a little bit. Like, why don’t certain communities trust you? Why don’t you get the results that the data says you should?” -Joe

“This is not just about decrim. This is about restoring our rights as citizens of the world, regaining autonomy over our bodies, [and] improving science.” -Joe

Salon.com: Why mental health researchers are studying psychedelics all wrong

Drugged: The Science and Culture Behind Psychotropic Drugs, by Richard J. Miller

Vice.com: The Race to Patent Psychedelics Is Just Getting Started

Zero to One: Notes on Startups, or How to Build the Future, by Peter Thiel

Tim Ferriss: Some Thoughts on For-Profit Psychedelic Startups and Companies

Vice.com: Investors Are Debating Who Should Own the Future of Psychedelics

Ohchr.org: Article 31 of the United Nations Declaration on the Rights of Indigenous Peoples and the World Indigenous Nations (WIN) Games

Narrative Medicine: The Use of History and Story in the Healing Process, by Lewis Mehl-Madrona

Psychedelicstoday.com: Psychedelic Capitalism and Other Myths: Is the Joke On Us?