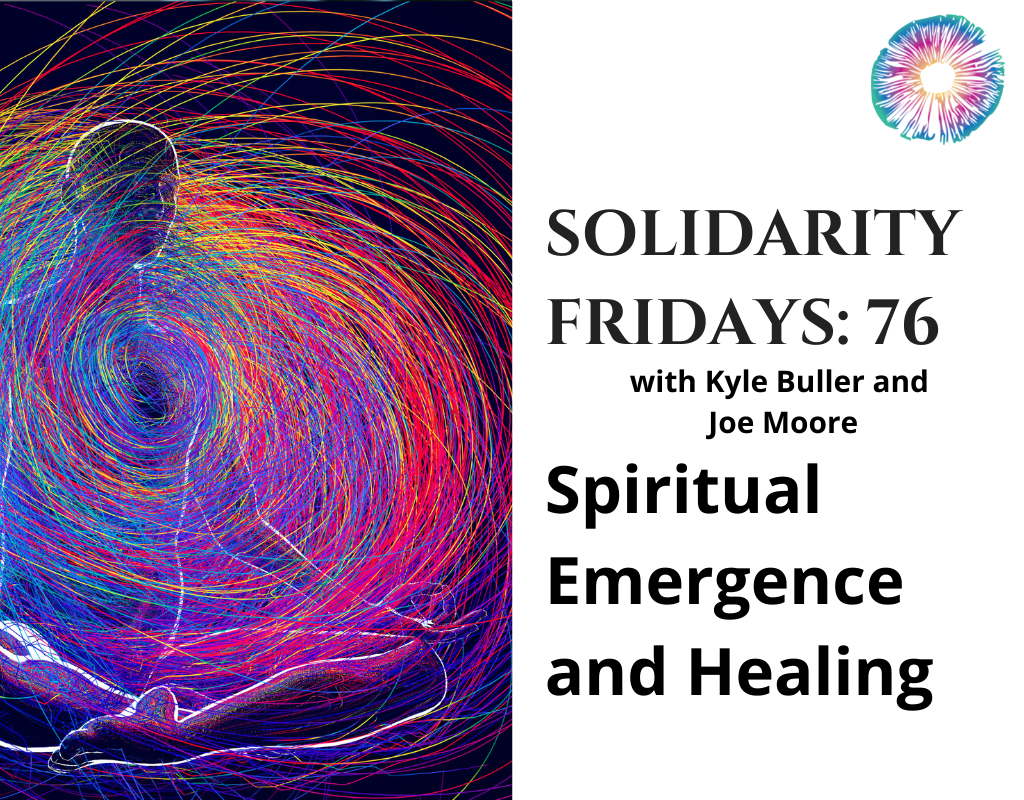 In this week’s Solidarity Fridays episode, Joe and Kyle sit down for a discussion spanning spiritual emergence, the concept of the transpersonal, and a simple but huge question: What is healing?

In this week’s Solidarity Fridays episode, Joe and Kyle sit down for a discussion spanning spiritual emergence, the concept of the transpersonal, and a simple but huge question: What is healing?

They dissect the concept of healing and how it relates to psychedelics and inner work: Is the psychedelic experience always healing? What needs to be done to turn traumatic experiences into catalysts? Is it fair to relate the psychedelic experience and post-experience integration work to surgery and the body healing on its own? Can we create a realistic and affordable model for retreat centers with built-in, long-term, communal support systems? How do we know when to trust the radical insights psychedelics may steer us toward? And how do we prepare for the changes in relationships they may create as well?

And they discuss plenty more as it relates to these topics: The difference between spiritual emergence and spiritual emergency, Ben Sessa’s idea of MDMA as an antibiotic for psychiatry, Ram Dass’ idea of not starting down a spiritual journey unless one intends on finishing it, the work of Ken Wilber, Erik Davis and the mysticism in Grateful Dead lyrics, the challenge of earthly expectations, consensus and compromise, decadent mysticism, and the concept of a spiritual quest itself as healing.

“Maybe that’s a good way of looking at it: You’re having a massive intervention and then you heal afterwards. My tendons were so thrashed before a lot of my surgeries that I needed the surgery and then I needed to heal. The surgery wasn’t the thing that triggered the healing, but it set up the initial conditions from which I could then heal.” -Joe

“Is there something about a spiritual quest that heals? I think, on a somewhat occasional basis, yes. …I think there’s something there. Intentionality and deep focus and reverence in the mystical experience; as we’ve seen at the Hopkins trials: the higher the mystical experience on the MEQ, the more healing. So there seems to be some sort of correlation there.” -Joe

“It’s normal, I think, to maybe not always feel healed even though a lot of the mainstream articles are kind of portraying it as that. And I think that’s the danger around not being honest about our own experiences and our own process, [and just] putting out the highlights of the experience [instead of] really just trying to be real and say there’s some challenging stuff that comes up. …People really just want to highlight the peaks. But there’s a lot of juice in the valleys.” -Kyle

“A friend I was talking about earlier talked about all these other changes that happened in clinical trials and found a researcher attached to a major university that said, ‘Well, you know, I have seen some pretty dramatic relationship changes (outside of healing) in these folks that have gone through the trial.’ …What does that mean? And how do we prep people for that? Like, are you going to be able to stay with your wife after you’ve seen God two or three times in session?” -Joe

The Adventure of Self-Discovery: Dimensions of Consciousness and New Perspectives in Psychotherapy and Inner Exploration, by Stanislav Grof

​​High Weirdness: Drugs, Esoterica, and Visionary Experience in the Seventies, by Erik Davis