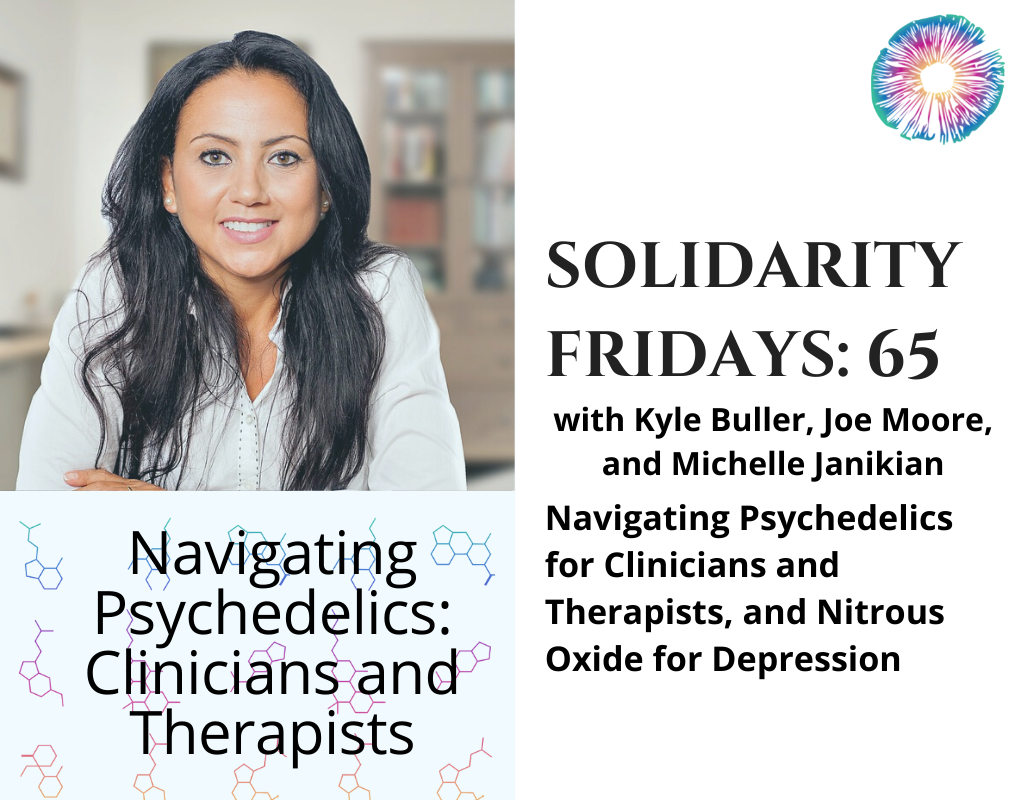 PTSF65 – Navigating Psychedelics for Clinicians and Therapists, and Nitrous Oxide for Depression

In this week’s Solidarity Friday episode, Joe, Michelle, and Kyle switched things up a bit by broadcasting the recording of this episode on Instagram live, as well as dedicating much of the discussion to our oft-mentioned but not properly dissected Navigating Psychedelics for Clinicians and Therapists course.

In this week’s Solidarity Friday episode, Joe, Michelle, and Kyle switched things up a bit by broadcasting the recording of this episode on Instagram live, as well as dedicating much of the discussion to our oft-mentioned but not properly dissected Navigating Psychedelics for Clinicians and Therapists course.

The course is always mentioned briefly, but based on the number of questions we receive, (and with the latest cohort of the live edition beginning in a month on July 22nd), we felt it was time for Michelle to interview Joe and Kyle about the course: what it really entails, who it’s for, what a “Grofian, transpersonal framework” means, what people who have taken it have gone on to do, and what Joe and Kyle’s favorite parts of the course are. They talk about the course’s humble beginnings, they both try to define “process” with varying degrees of success, and Joe compares teaching the class to Yoda teaching Luke Skywalker the ways of the force after he crashed on Dagobah.

They then discuss two interesting news stories. First, they look at a new trial studying the use of nitrous oxide as a treatment for depression, which is exciting due to the clean and quick application of nitrous, as well as simply the hopeful option for a different treatment other than SSRIs or benzodiazepines. And along the lines of hopeful new treatments, they then review a press release from Cybin, a company working on a proprietary psilocybin-esque compound specifically to treat anxiety disorder indications. This gets everyone reflecting on their own process, their own work, and the need to critique psychiatry and medicine while also accepting they have their place, along with every other framework.

“[Stan Grof] went through, had all the training, was doing Freudian analysis and clinics and working at a hospital and he was not very impressed with the results coming from Freudian therapy. And all of a sudden, LSD came on the scene. …And [he] had this really crazy LSD experience. …Just a really massive experience: a light a million times brighter than the sun, all this fun, classical, mystical experience stuff. [He] went in a materialistic, mechanistic Freudian, [and] came out a devotee of Shiva. And what does that mean, that in 14 hours (or whatever- however long that was), that that kind of a change can happen?” -Joe

“Just thinking about psychedelics and education, psychedelics are pretty weird. And to teach it and think that it’s so streamlined and these are the things that we have to talk about in this way, and we’ve had it all figured out; I think if psychedelics taught me one thing, it’s [that] we know nothing. And I think this is where the curiosity comes back. Our teacher Lenny was talking to Stan [Grof] (I think it was back in the 80s, at Esalen), and Lenny was sharing a story with him, and Stan just looked at him and said, ‘Many strange things happen on LSD.’” -Kyle

“We can critique psychiatry and we’re not saying, ‘Defund psychiatry.’ We’re not saying, ‘Get rid of it.’ A critique can lead to growth. That’s why you take workshops as an art student. Critiques lead to learning and they can lead to change in a positive way. That’s all we’re asking for: just thinking about things critically, and then perhaps we can find little things to upgrade a little, in a way, or just be a little better.” -Michelle

“Science is a series of provisional truths and we want to keep updating our knowledge map. And science is the best tool we have for understanding reality, but there are other ways of knowing. So that’s kind of where we live; in this weird, hybrid landscape of traditional ways of knowing, and then also the scientific method being the one that gets us the most certainty.” -Joe

Navigating Psychedelics For Clinicians and Therapists

Adventures Through The Mind: What Does it Mean to Have a Spiritual Crisis? Psychedelic Cafe 6 (featuring Kyle)

When the Impossible Happens: Adventures in Non-Ordinary Realities, by Stanislav Grof

Mad in America: Bad Science, Bad Medicine, and the Enduring Mistreatment of the Mentally Ill, by Robert Whitaker