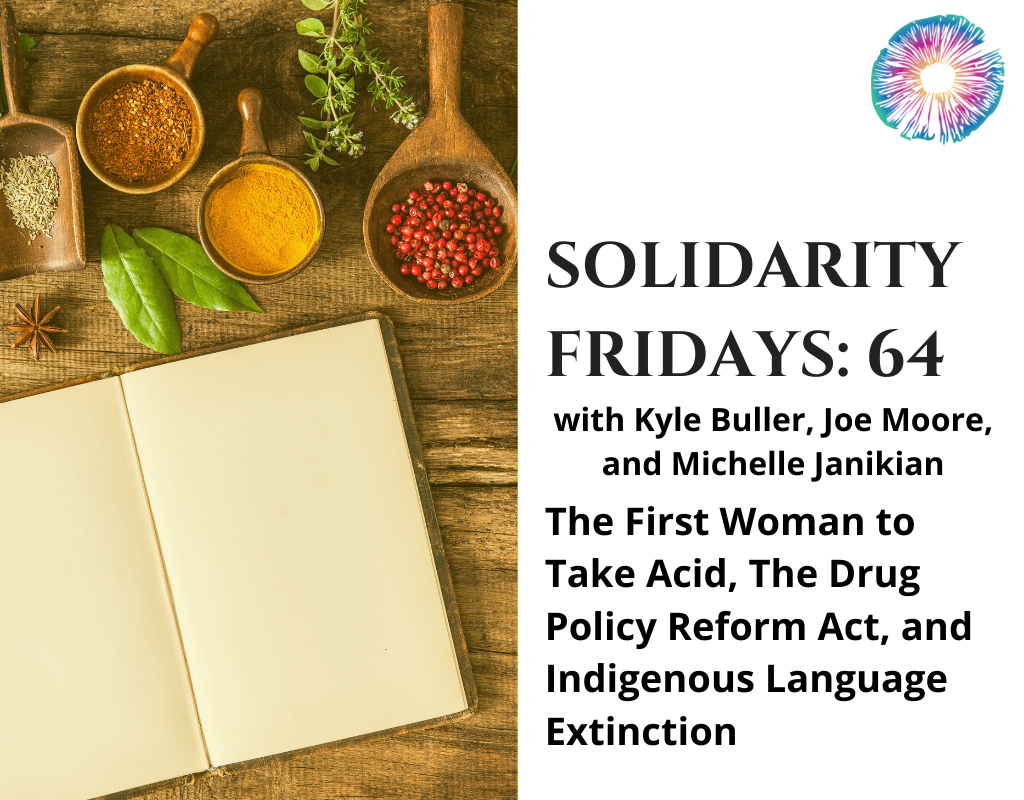 In this week’s Solidarity Friday episode, Michelle, Kyle, and Joe review the most interesting articles and recent news in the world of psychedelia.

They first talk about Chacruna’s article highlighting not only the world’s first trip-sitter, but also the first woman to take LSD, Albert Hofman’s assistant, Susi Ramstein. They then look into the new Pill-iD app coming out in the UK, which will match user-submitted pictures of MDMA with pictures from their database, using machine learning to determine purity and strength. While this is good (especially in a post-quarantine environment of people very eager to chemically celebrate their ability to be together again), how much can we really know without any chemical analysis? And how much should we trust their database?

They then revisit their discussion on California’s Senate Bill 519 (turns out it does mean legalization after all, but if so, why is “decriminalization” used in the bill’s title?), excitedly discuss the first all-drug decriminalization bill being submitted to Congress (the Drug Policy Reform Act, or DPRA), talk about psilocybin being studied for anti-inflammatory effects and Robin-Carhart Harris’ recent interview with Court Wing, and finally, get into the very real and often not-talked-about importance of ancient and Indigenous language and the danger of losing it: Are we going to lose more knowledge from the loss of language than from the destruction of habitat?

“The argument here is not only the human cost, [but] the real financial cost of an overdose is extreme, relative to getting ahead of this. So cities and governments can save money by offering this. Less dead bodies to pick up with your EMTs, less situations of overdose to respond to.  …If we can do harm reduction [and] say, ‘Hey, these are people too,’ we also save money, and we save lives, and we get those lives back into society in a hopefully meaningful way.” -Joe

“The bill is damning of the drug war, of criminalization, [and it] talks about how criminalization and the drug war have added more harm to consumption. And the fact that it passed the California Senate means that these politicians are starting to catch on to how brutal this has been. And in this post-BLM, post-George Floyd and Breonna Taylor era; hey, you guys have got to clean your act up, otherwise, you’re going to have riots on your hands.” -Joe

“If this bill does pass, I feel like that’s sending a message to the whole world that we can be rational again. This wasn’t rational, this wasn’t based on science, and a lot of people mistrust us now because of that. …What would we be showing young people if we did this? …Not that we need more respect for authority, but we could respect authority at all if they could show us that they could rule or govern us in a rational, science-based way.” -Michelle

“If we ever get to the point in human civilization where things start to collapse and we need to understand the environment [and the plants] a little bit more, we’re going to be very lost. Just going outside and looking around you, what plants do you know? What stories do you know about the plants around you? Do you know what’s edible? Do you know what’s medicinal? All these things that you call weeds are actually edible plants or have really great medicinal value. Do you know the story of the landscape in which you live in?” -Kyle

Filtermag.org: First All-Drug Decriminalization Bill to Be Introduced in Congress

Drugpolicy.org: Summary of the Drug Policy Reform Act (DPRA) of 2021

Psychedelicstoday.com: Psilocybin for Depression: A Q&A between Robin Carhart-Harris & a Psilocybin Study Participant

Confessions of an Economic Hit Man, by John Perkins

Chasing the Scream: The First and Last Days of the War on Drugs, by Johann Hari

The Unlikely Peace at Cuchumaquic: The Parallel Lives of People as Plants: Keeping the Seeds Alive, by Martín Prechtel