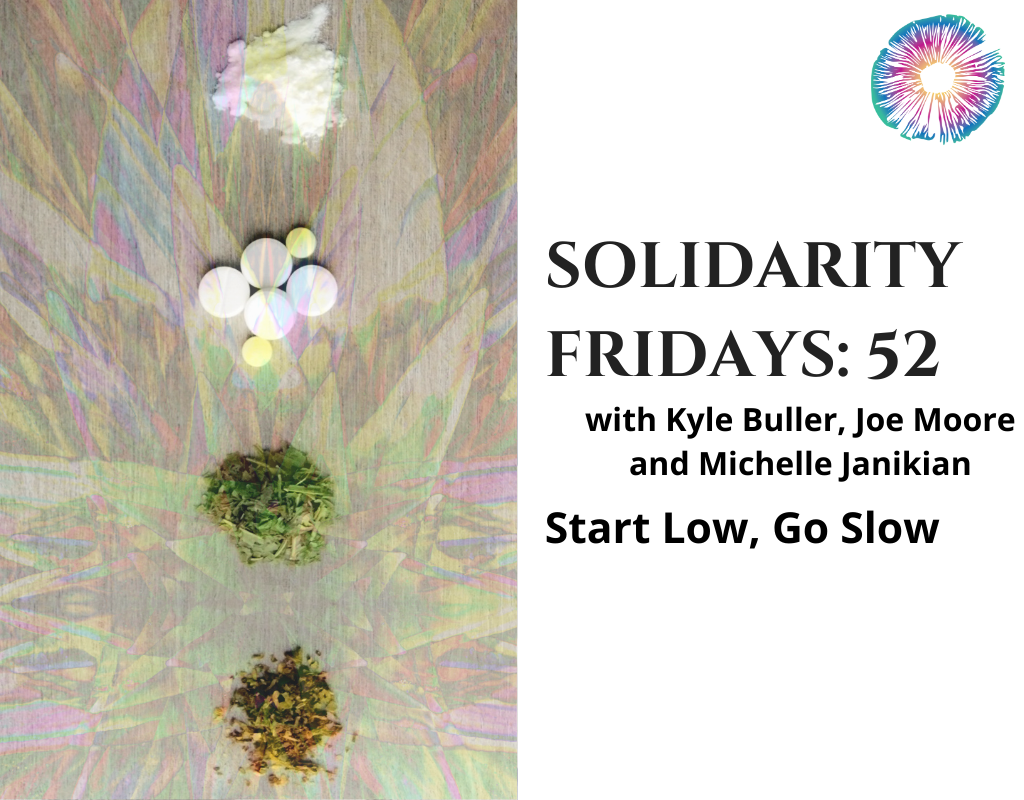 In this week’s Solidarity Fridays episode, Kyle, Joe, and Michelle start out by reflecting on the awesome conversation with Dr. Carl Hart from earlier in the week and everything it made them think about concerning the drug war, society’s framing of addiction, how different drugs have been vilified in different eras, privilege, and how greed is keeping the truth from us.

In this week’s Solidarity Fridays episode, Kyle, Joe, and Michelle start out by reflecting on the awesome conversation with Dr. Carl Hart from earlier in the week and everything it made them think about concerning the drug war, society’s framing of addiction, how different drugs have been vilified in different eras, privilege, and how greed is keeping the truth from us.

They then launch into the articles, which really run the gamut: Nebraska’s governor saying cannabis will kill your children, the Biden administration asking staffers to resign over past cannabis use (What? A politician LIED TO US?!), a study from 2008 showing no statistical difference between SSRI and placebo effects (notable because it mirrors findings from the recent microdosing study they keep discussing), and an opinion piece on the healing power of mushrooms. They then talk about an interesting study where researchers are looking to predict who will do best with psychedelic-assisted therapy, and who might have a really challenging experience. Could you always predict that? Or is it just about getting to know a patient, supporting them, and titrating the dose, hence the title?

And since there aren’t enough links on this page: If you’ve been looking to take the Navigating Psychedelics for Clinicians and Therapists live course you keep hearing about, new dates are up, so now is the time! And if you want a free copy of Dr. Carl Hart’s amazing book, Drug Use for Grown-Ups, we’re giving away 5, thanks to Penguin Random House, so make sure to enter the giveaway!

“Why are we only concerned about someone’s psychological well-being when it has to do with drugs?” -Michelle

“Heroin was killing a lot of Black men in the 70s and no one cared. And now that it’s killing all these white people with opioids and all this middle-class stuff, all of a sudden, we care. And we want harm-reduction and we want laws and we want drug-checking. But no one gave a fuck 40 years ago.” -Michelle

“So we had the war on drugs and ‘drugs are bad.’ ‘Weed, psychedelics- they’ll make you go crazy.’ And now we have that part of the drug war sort of ending and we’re legalizing them and we’re making money off of them, so all of a sudden, we’ve gone from one untruth which is ‘all drugs are bad’ to this kind of other untruth which is like, ‘Weed and psychedelics: they’ll save your life, they’re great, everyone should use them!’ It’s like, fuck, dude, where was the middle? Where was the neutral? Where was the actual truth?” -Michelle

“How do we catch medicine up to the state of science? Medicine seems to be 10 to 30 years behind science, often. …Sorry doctors- I don’t mean to insult you, but it’s your field, it’s not you as an individual. If you’re listening to this show, clearly you’re ahead of the curve.” -Joe

“Just thinking about how transpersonal came out of the humanistic movement because they needed something new, we’re at a new point where like, how do we incorporate and integrate a lot of this neuroscience, the somatics, the transpersonal, the depth, and what could a new field look like? …What would that look like to create a new branch of psychology that really incorporates and integrates a lot of this stuff, and the impact that psychedelics have had on this? What type of theories and frameworks do we need, moving forward, as psychedelics become more integrated into the culture and into the medical realm? Do we need to bring psyche back a little bit with the psychedelics, to really help give a framework or some context to some of these transpersonal and numinous experiences?” -Kyle

Narconomics: How to Run a Drug Cartel, by Tom Wainwright

Ncbi.nlm.nih.gov: Initial Severity and Antidepressant Benefits: A Meta-Analysis of Data Submitted to the Food and Drug Administration

Bdnews24.com: Can magic mushrooms heal us?

Scienceblog.com: Predicting Who May Do Best With Psychedelic-Assisted Therapy