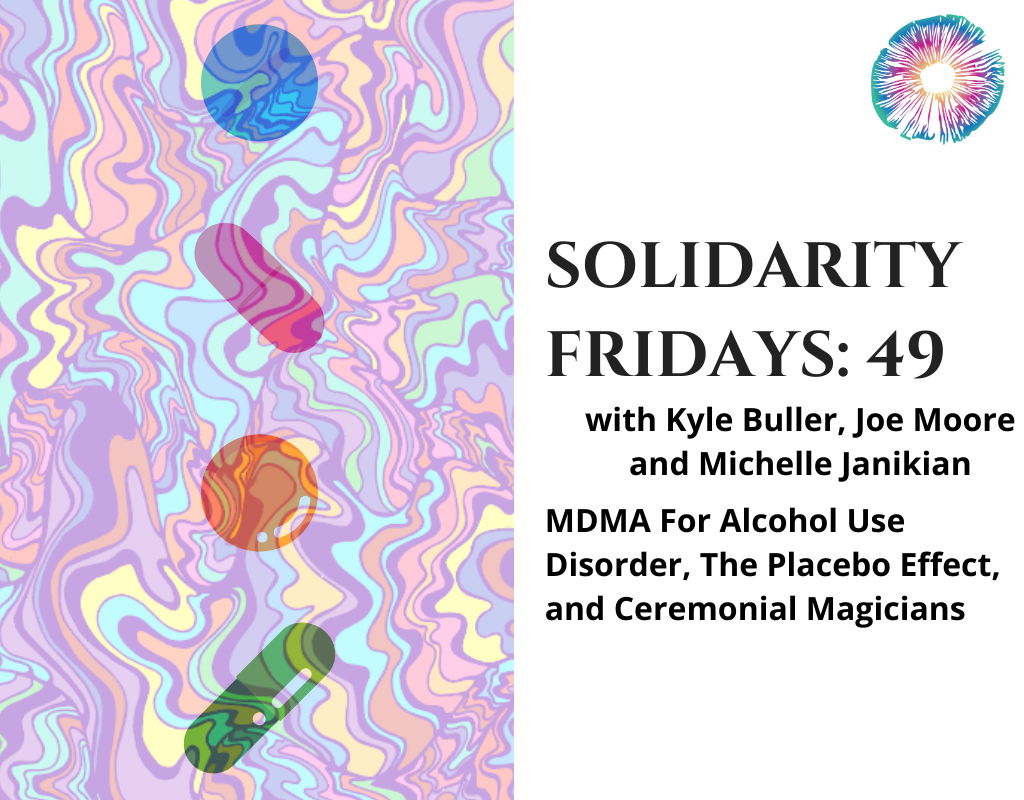 In today’s Solidarity Fridays episode, Kyle, Joe, and Michelle once again meet through the airwaves to discuss recent news articles and see where that takes them.

They first talk about a North Wales police boss who wants to give prisoners controlled amounts of cannabis as a way to combat violence and drug addiction and how that questions the notion of prisoners being expected to suffer. Then, they head to “Missurah,” where a bill was just introduced to remove their established provision against Schedule I substances, expanding eligibility and getting them closer to how other states use 2018’s federal Right to Try Act to help people with terminal and life-threatening illnesses.

They then talk about a study that showed significant reduction in alcohol consumption after MDMA use and why the sense of connection that MDMA fosters could be the reason, a self-blinding microdosing study that proved the power of the placebo (and expectation) effect and what that might mean for regular microdosers, and a listener email highlighting the importance of establishing the idea that rituals and ceremonies don’t have to have a Shaman, healer, or some other person in an all-knowing, leadership role.

Other topics covered: how to make therapy cheaper, whether or not a lot of letters after someone’s name matters, learning survival skills, Paul Stamets, NASA, and astromycology, Zapatistas, Star Trek: Discovery, and Pauly Shore (but only a little- hopefully more next week).

“I feel like they’re getting a little out of hand sometimes with how we sell these treatments. In press releases or on websites for retreat centers, it’s like: ‘Cure everything that’s ever been wrong with you in one week!’ and ‘Addiction no more!’ -all this kind of stuff. …It’s not as sexy to sell a mushroom retreat as like: ‘Start this new relationship with mushrooms and work on it every day for the rest of your life!” That’s not going to sell.” -Michelle

“How essential is it that the therapist is even in the room? Can’t you just be somewhere really safe with a volunteer sitter or somebody that doesn’t have a huge student debt to pay off? Is the conversation being steered in a particular direction because of incentives like graduate degrees, licensure, etc? …If I can consume $30 of street MDMA and not have to pay 12 grand, and I can just go to my medicare-covered therapist a few times before and after, that’s a way cheaper proposition.” -Joe

“There’s a lot of great healers in the world that would be really amazing at doing a lot of this stuff, but could they afford their degree? The answer is probably no, and so they don’t get to even be at the table to make any of these decisions.” -Kyle

“We can say microdosing is all a placebo effect, but I think there’s something more interesting here on the power of the expectation effect, and how we’re almost manifesting our own mood change.” -Michelle

“You don’t need a Shaman there, I think, for a spiritual experience. …You don’t need someone in a seat of power. I also feel like Shamans and healers- they’re fascinating and they’re a deep part of human history, but so is the desire for power. …You don’t have to get stuck in that ‘I’m nobody, the Shaman has all the power, and I need you for learning’ [narrative].” -Michelle

Drweil.com: Is The Placebo Effect Real?

Psychedelicstoday.com: Online Psychedelic Community Options to Ride Out the Rest of Covid-19

Free Psychedelics Today Event: On Dreams, the Feminine and the Practice of Psychotherapy: An Interview with Maria Papaspyrou (with Kyle and Johanna Hilla)