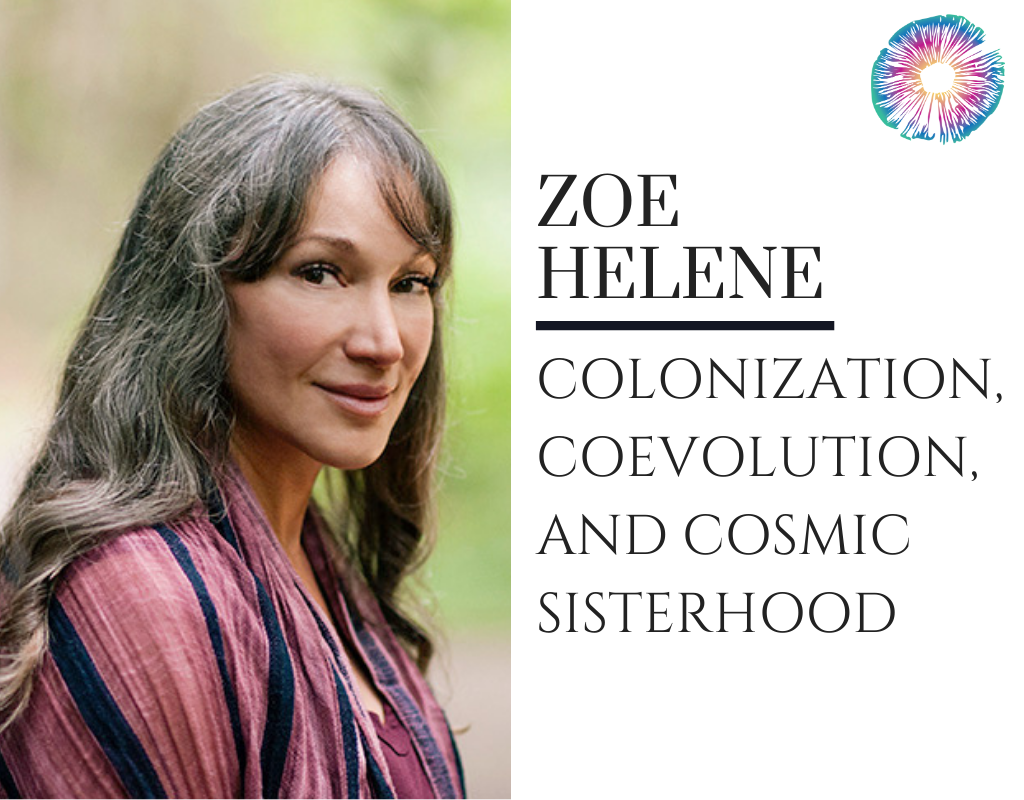 In this open, free-form conversation, Zoe discusses her career path in male-dominated fields of performing art, then high-tech, then natural products, leading to a major shift leading to the creation of Cosmic Sister. She talks about concepts of othering and ableism, of coevolution and coextinction, and about how people often talk about how ayahuasca “tourism” harms Indigenous communities but rarely talk about the many ways it can and does benefit Indigenous people. She also talks about how many Americans have a fleeting, fickle, media-centric attention span on critical social and environmental issues, how living in “late-stage patriarchy” affects everyone across the gender spectrum, and how most males don’t think about how it has harmed and is still harming them.

They talk about Zoe’s “Ancestor Medicine” and colonization and the decolonization movement. She talks about ancient Mycenean and Minoan civilizations and their use of sacred psychedelic plant medicines, the tribalism of Greek people in general, and about how early Greek civilizations worked with sacred medicines even more than most people think (not just the Mysteries of Eleusis). She talks about the effects of colonization and the roots of cultural appropriation, and about ancient gold Signet rings depicting medicine women, including one that looks very much like an artistic depiction of ritual ecstatic dancing and ergot.

Colonization is multidimensional, and it isn’t just for people in the United States of America. We need to decolonize from ALL the colonizers. Globally, and throughout herstory. Dominator cultures have been around since the beginning of time, in subtle, systemic ways and in brutally apparent ways—and it’s still going on.

When people talk about Venus, I get on their cases about it. Please don’t call her Venus. Please call her Aphrodite. When the Romans appropriated Aphrodite, they didn’t just change her name. Venus is a twisted, patriarchal version of Aphrodite, and calling her Venus is no different from other cultural appropriations people talk about. Same goes for Mercury, Mars, Vesta and all the others. Please call Mercury by his original name, which is Hermes. Hermes is so, so much cooler. Mars is Ares. Cupid is Eros. I cringe when pop culture celebrates Diana, rather than the original Artemis. Artemis is a complex and powerful archetype, and we need her now more than ever.

There’s this prevailing idea of ayahuasca centers and so-called ‘ayahuasca tourists’ traveling to Peru and ‘taking advantage of indigenous people.’ Yes, of course there are always going to be bad people and yes, some tourists are crass and stupid, but most people go to Peru as a pilgrimage, and if anything, are guilty of romanticizing the Indigenous people in ignorant ways like, ‘Oh, they all want to run around in grass skirts.’ No, they want a cell phone. They want a good Internet connection so they can watch soccer or study or connect with loved ones or have access to more economic opportunities. Ayahuasca centers closing because of Covid-19 has been d devastating for the local and Indigenous people.

I hope people hold onto this passion for change. Fighting Racism should not be looked at as another damn trend rather than something we keep working on. We can’t quit. Same with Sexism and Environmentalism—all the big things. This is, I think, a flaw in our culture. We have this habit—it’s a trait I’ve especially noticed in American culture—where we are fickle about important issues in the news. Remember when the Amazon was burning? It’s still burning, and so many people were devastated by that, as if that was the first time we’d learned about the destruction of the Great Amazon.  In mainstream American culture many people will think, somewhere in the back of their head, that it’s done. It’s fixed. ‘That got solved.’ Well, it didn’t. It’s still raging on. All the big social and environmental issues should not be considered trends. If you truly care, you are needed for the long haul.

Her past appearance on Psychedelics Today 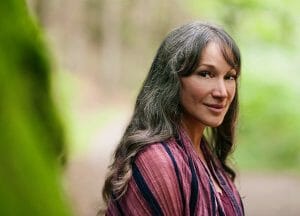 Zoe Helene is an artist, environmentalist, and cultural activist best known for women’s empowerment and sacred plants such as cannabis, ayahuasca, peyote, and psilocybin mushrooms—our co-evolutionary allies—and for “Psychedelic Feminism,” a term she coined and popularized in support of women in psychedelics. Zoe’s personal work with sacred plants continues to deepen her determination to help protect the earth’s diverse biological abundance. She believes that creating a true balance of power across the gender spectrum—globally—is the only way humans (and non-humans) will survive, and that it is our moral responsibility, as Earth’s apex predators, to protect and defend the rights of non-humans to live freely in thriving, uncompromised wilderness sanctuaries. She founded Cosmic Sister, an environmental feminist collective for progressives who understand that the current, grossly imbalanced “power-over” patriarchal model will continue to lead humans down a devolutionary path that will eventually end in the destruction of life on Earth as we know it. Cosmic Sister’s psychedelic feminism educational advocacy projects promote sacred plant spirit medicines as a way to “jump-start rapid cultural evolution,” starting with women.