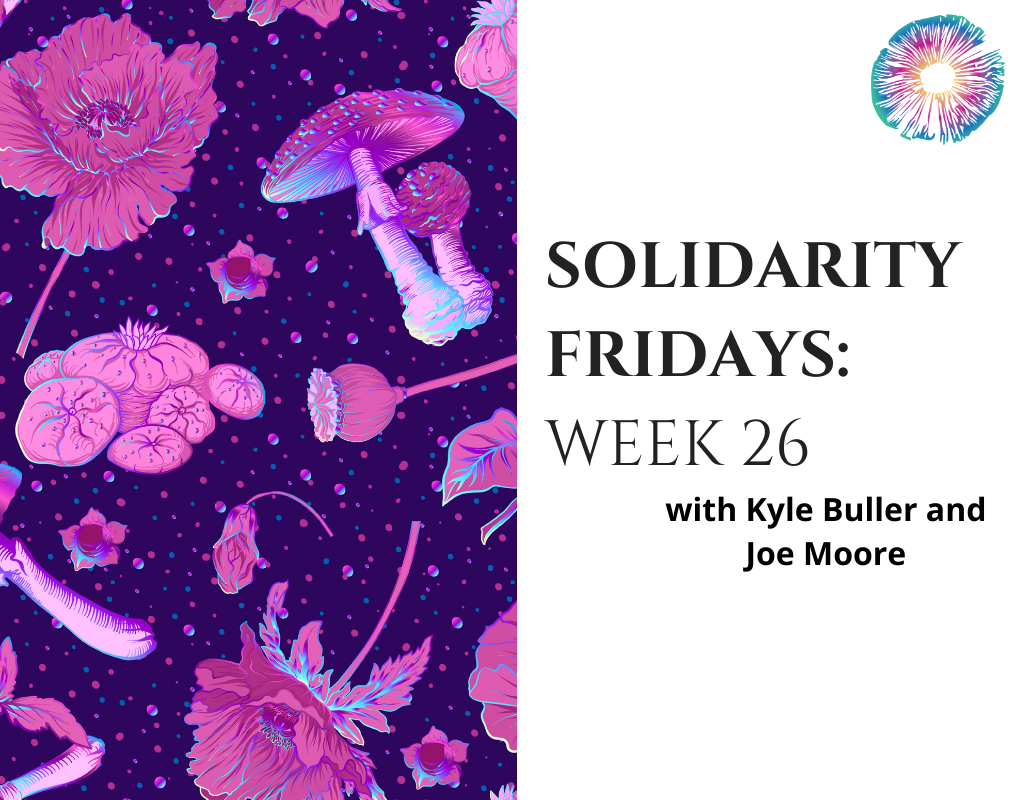 In today’s Solidarity Fridays episode, Joe and Kyle sit down and discuss recent items in the news.

In today’s Solidarity Fridays episode, Joe and Kyle sit down and discuss recent items in the news.

They first discuss an update to last week’s Michigan story: that this week, the Ann Arbor city council unanimously voted to decriminalize entheogenic plants. While this is great progress, remember that these substances are still illegal- just decriminalized, and as the saying goes: don’t be the low-hanging fruit. This brings up the concept of likening the ability to get these substances to earning (and keeping) a driver’s license, and the idea of temporary autonomous zones.

Next, they talk about the formation of a global group called the Psychedelic Medicine Association (PMA), formed to bridge the gap between the medical establishment, patients, and the industry in general. While there are already organizations doing this to an extent (like the very website you’re on right now), most doctors don’t have the time needed to really dive in, and shorter sound bites or articles vetted by those in the know could be very beneficial towards their growth in this new (to them) field.

They also report on a new study pinpointing exactly how psychedelics bind to 5-Ht2a serotonin receptors, which sets the stage for new kinds of antidepressants and antianxiety drugs, could help with cluster headaches, could even help explain HPPD (hallucinogen persisting perception disorder), and leads to a discussion of natural vs. synthetic drugs and the ethics of thinking someone needs to go through the psychedelic experience in order to heal.

Lastly, they discuss Compass Pathways going live on the stock market, starting at $17 a share and hitting $38 within a week, which leads to a discussion on how larger companies sue each other over valuable information but regularly take information from Indigenous people and people who’ve been working in the underground for years. In order to pay proper respect to plant medicine lineages, should we “take” MDMA, LSD, ketamine, and other synthetic substances as part of a western lineage and categorize them differently?

“That’s the vision that I would like to see. More expanded access, less legal presence. Less Empire interfering with the rebels.” -Joe

“Is it the case that people need psychedelic experience? No. I would prefer that more people have psychedelic experience, but I don’t think it’s an ethical obligation for more people to have it, or that ‘oh, in order to deserve healing, you need to go through that potentially tortuous or difficult experience [idea]’. Or joyous experience- it doesn’t have to be bad. There’s a lot there, and just thinking that people have an obligation to have the experience is a little whack to me.” -Joe

“The hard problem of consciousness is still there. What is mind? Where is mind? What is consciousness? Where is consciousness? Really big questions. We know mind appears real. We know consciousness appears real, but what is that? There’s a lot of questions left. Philosophy of mind and neuroscience are not really communicating too regularly. I saw headlines: ‘Oh look! LSD finally solved! We know how it works now!’ Like, yea, kind of, but not really, because we don’t even know what mind or consciousness is. …Most people are willing to say ‘mind equals brain,’ and use interchangeably. I think that’s pretty common parlance, but I suggest people check it out. Dig in a little bit to philosophy of mind and limitations of neuroscience and mind. I’m not trying to say we shouldn’t do neuroscience- we absolutely should. But, making conclusive statements like, ‘Oh cool, since neuroscience said this, then God isn’t real’ [is] kind of a goofy argument.” -Joe

“What it does it look like from a capitalistic point of view? X company develops a patent and then X other company goes over and wants to use that- what usually happens? There’s usually a lawsuit that entails, right? But if X company goes to an indigenous and underground community and extracts information and then they go use that to profit, what really happens there? Not much. The bigger company that has all the money usually will just dominate.” -Kyle

Psychologytoday.com: This Is Your Brain’s 5-HT2A Receptors on LSD or Psilocybin

Narrative Medicine: The Use of  History and Story in the Healing Process by, Lewis Mehl-Madrona