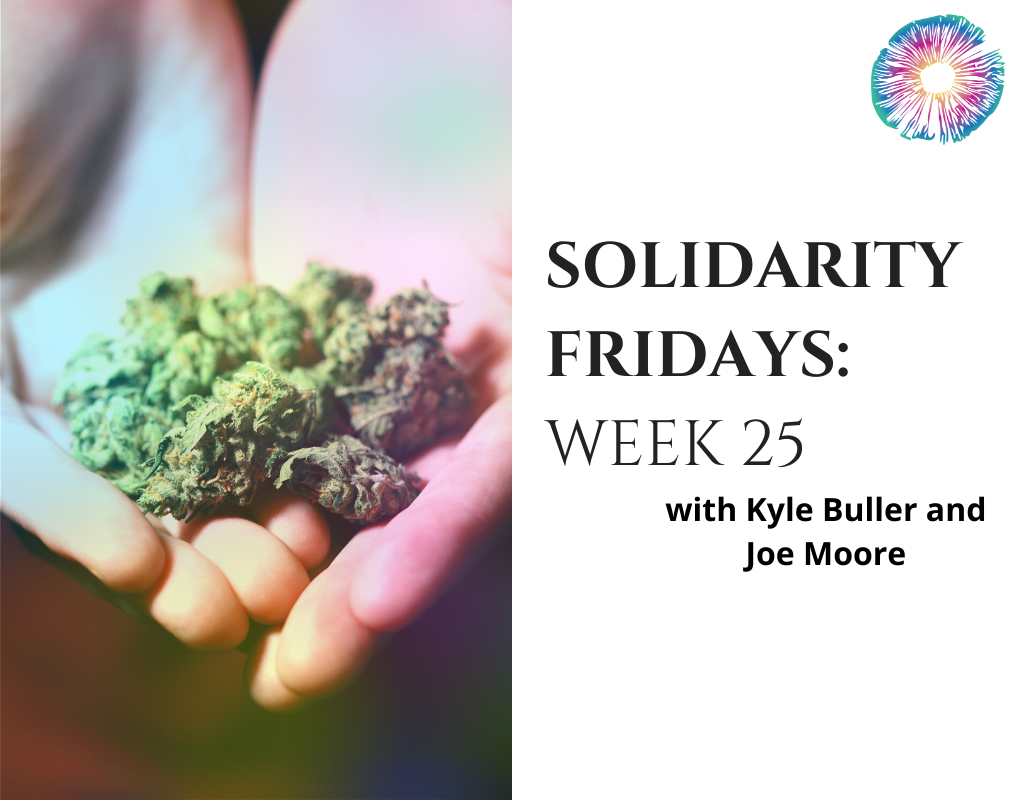 In today’s Solidarity Fridays episode, Joe and Kyle discuss recent items in the news and dive into cannabis-assisted psychotherapy after Joe recently helped with his first session.

In today’s Solidarity Fridays episode, Joe and Kyle discuss recent items in the news and dive into cannabis-assisted psychotherapy after Joe recently helped with his first session.

They discuss Compass Pathways’ projection that their upcoming stock price could be $14-$16 a share, giving them a possible valuation of as much as $544 million and the problem of having Peter Thiel as one of their leading investors, as it has recently come to surface that he met with white nationalists in 2016 and had good things to say about them. This, in addition to his concerning data-mining company, Palantir Technologies, soon going public puts a lot of the wrong attention and bad press on Compass Pathways.

They talk about UC Berkeley launching a new center for psychedelic science and education with Michael Pollan as one of the co-founders, Decriminalize Nature Ann Arbor putting forth to the city council a resolution to decriminalize entheogenic substances on September 21st, and progress in Washington D.C. and Chicago’s decriminalization efforts. They also talk about Dr. Bronner’s new “Heal soul!” campaign, which includes new labeling about psychedelic-assisted therapy and a 10% donation of net October sales towards several familiar organizations including: MAPS, Heroic Hearts Project, The Indigenous Peyote Conservation Initiative (IPCI), and Veterans Exploring Treatment Solutions, Inc. (VETS).

Lastly, they talk about cannabis-assisted psychotherapy sessions and how similar they are to both psychedelic and breathwork sessions, how Kyle uses cannabis and somatic work together, and how established worldviews and paradigms can shift through narratives and critical analysis from both sober and psychedelic-assisted thinking.

And finally, the next round of Navigating Psychedelics (beginning September 17th) is now officially sold out, but dates for the next round will be announced soon if you missed your chance. Additionally, there is a new class offering which explores Jungian psychology called Imagination as Revelation, developed by Kyle and Johanna Hilla-Maria Sopanen, and a new class with Lenny Gibson coming in October about the history of western philosophy (info/sign up here).

On cannabis use: “It’s always been very psychedelic to me. The way I work with it is somatically, being able to lie down, incorporate some of the breathing techniques, do movement, do yoga, do some bodywork, and to really work with whatever is coming up in my body that way, maybe play some music… I kind of started developing this naturally over 10+ years just from– it was like listening to the plant saying ‘this is how I should be used’ in a sense. Like, ‘every time you go do something stupid with me, X might happen.’ So I started getting the message of: use this more consciously. This is a tool for inner exploration.” -Kyle

“It’s this cultural baggage around cannabis. We think ‘oh you smoke it at a Grateful Dead show’ or ‘you watch Cartoon Network late at night while you’re smoking pot.’ You don’t think: ‘Let me close my eyes with intention and journey with it.’ That’s not part of our cultural vision of the plant and our relationship to it. Though, why not? There’s no reason not to. If we can cure or help manage or treat a lot of these things happening in our psyche with cannabis, what kind of miracle is that?” -Joe

“Similar to Robert Anton Wilson’s kind of reality tunnels, you can flip on the Marxist lens, you can flip on the existentialist lens, or modern capitalist lenses just to allow you to get a better picture of what’s happening in front of you. You’re never going to see objective reality but you can get closer and closer and closer. And the more lenses you use, the better you’re going to get. Does a single telescope give you a great idea about a planet? No, but when you have 400, you’re going to have a lot better [idea]. What happens when you throw a satellite out there and you’re able to see from outside the atmosphere?” -Joe

“I guess I come back to narrative a lot. If you’re telling somebody that they are sick and broken, what are they going to think about that, that they’re never going to be able to heal? Is there power in narrative? If you have a more hopeful narrative, can people heal? I’m just thinking about even in breathwork experiences, where I’ve visited narratives that are so embedded in me and then going through a breathwork session, being like ‘holy shit, maybe I don’t actually need to subscribe to that narrative anymore. Maybe that’s something I’ve been holding onto for so long, and maybe I do have the internal power to change.’ But most people just say, ‘no, that’s what it is. That’s going to be your lifelong sentence.’ Maybe not. How do we encourage people that they can change?” -Kyle

Investors.com: The First Psychedelic Drug IPO Could Be Worth More Than Half A Billion Dollars

Buzzfeednews.com: Peter Thiel Met With The Racist Fringe As He Went All In On Drumpf

Vox.com: Everything you need to know about Palantir, the secretive company coming for all your data

Washingtonpost.com: D.C. residents to vote on decriminalization of ‘magic mushrooms’ on November ballot