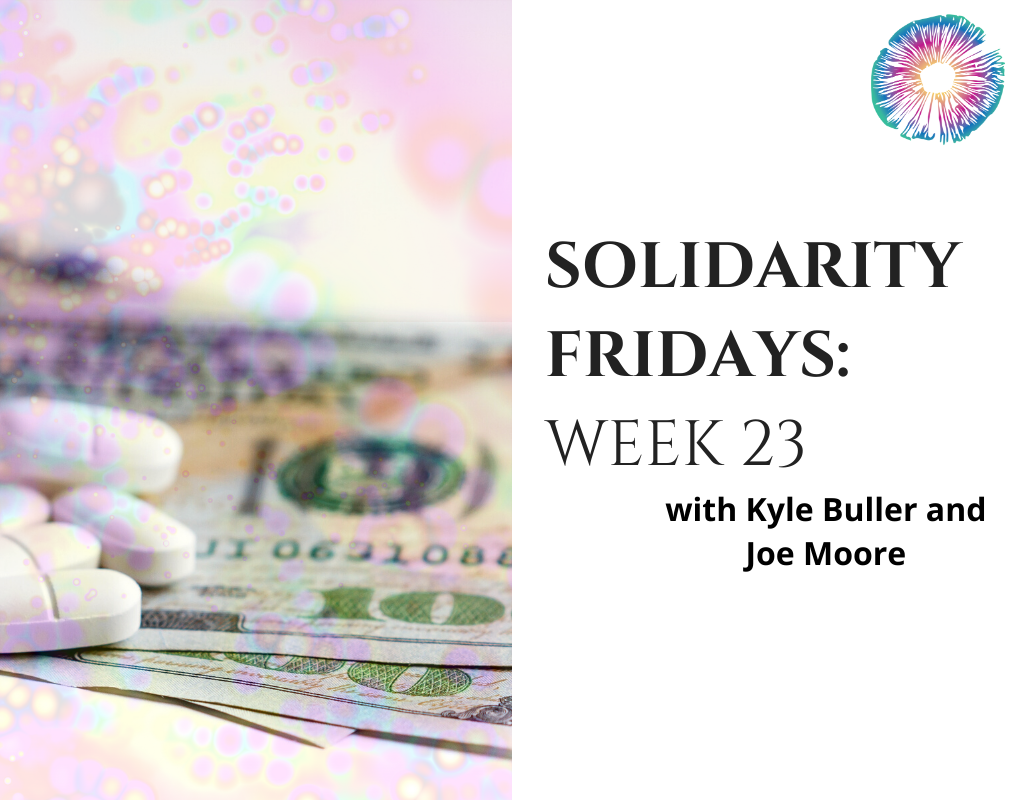 They cover a new LSD microdose trial to study the effects of 5, 10, or 20 µg on acute pain, seeing how long participants could hold their hands in 37.4° F water. Led by researchers from Maastricht University with help from the Beckley Foundation, this is the first study of its kind since Eric Kast first studied the effects of LSD on acute pain in the 1960s, and could help lead to LSD being prescribed for acute pain over the more standard and very addictive and dangerous opioids. This leads towards the topic of pain in general and our relationship with it- can we figure out how to have pain not affect us the same way by not giving it the same attention we’re used to giving it?

They talk about Compass Pathways filing an application with the SEC for a NASDAQ listing, as well as already raising over $80 million towards funding clinical trials for psilocybin-based therapy for treatment-resistant depression, and the ways corporations being tradeable in such a public view is good for everyone: improved market sentiment and opinion towards psychedelic companies, increases in mergers and acquisitions, and a trickle-down monetary effect for other companies in the same sphere.

And they talk about Mind Medicine Australia applying to reschedule both psilocybin and MDMA from their Schedule 9 category (dealing with prohibited substances) to Schedule 8 (which deals with controlled medicines). If they’re successful, they’ll be the first country in the world to successfully de-schedule these substances. This leads to a discussion of drug policy work and the drug war, why it’s ok for some parties to only focus on one part of the psychedelic renaissance, giving thanks to the people who fought for years to get us to where we are today, and recognizing privilege when trying to keep psychedelics within specific clinical containers to afford job security.

They also discuss Papadosio’s new album, “Microdosio,” and remind us that spots for September 17th’s early Navigating Psychedelics class are sold out, but spots remain for group 2, so sign up now! Additionally, there is a new class offering called Imagination as Revelation, developed by Kyle and Johanna Hilla-Maria Sopanen.

“It seems, as a culture, we kind of are more ok with the stupors and the depressants- alcohol and opioids and benzos and stuff like that. And some of these other substances that maybe help us perceive things a little bit differently, in another way, are stigmatized. I don’t know, maybe that’s just our relationship with consciousness- that there needs to be a ‘right’ way of seeing the world.” -Kyle

“If it’s just going to stay within the clinical paradigm, what about the people that can’t get access to it, that are still going to be arrested for these substances? If we’re really thinking about people’s overall wellness and health and life, do we want potential clients- people that are already suffering- then in jail or having part of their rights taken away from them because maybe they were trying to heal? I think it is important for us in the professional world to also speak up about drug policy. And I know it’s scary because it does feel like professional suicide at times, because you want to keep it within that clinical scope so you can feel professional and remain professional, but I don’t know, I just think about people who are trying to heal.” -Kyle

“What do we have in the world for young people to help them with meaning-making? Next to nothing. We’ve got like, angry memes, 4chan, horrifying bullying online, and that’s just a place-holder because there’s no meaning- there’s no context for where you fit into society that makes sense. For an entity as amazing as humans, that’s a big deal. Humans are amazing, and that’s probably something we agree on- a human being is a fascinating, interesting, infinitely powerful thing. Endlessly interesting. So to just say ‘ok, all you’ve got is video games and being an asshole on youtube,’ like, really? Is that what life is? What if you were able to give these people deep, ritualistic initiations into adulthood with 3-5 grams of mushrooms, given they were screened appropriately? What a send-off into adulthood.” -Joe