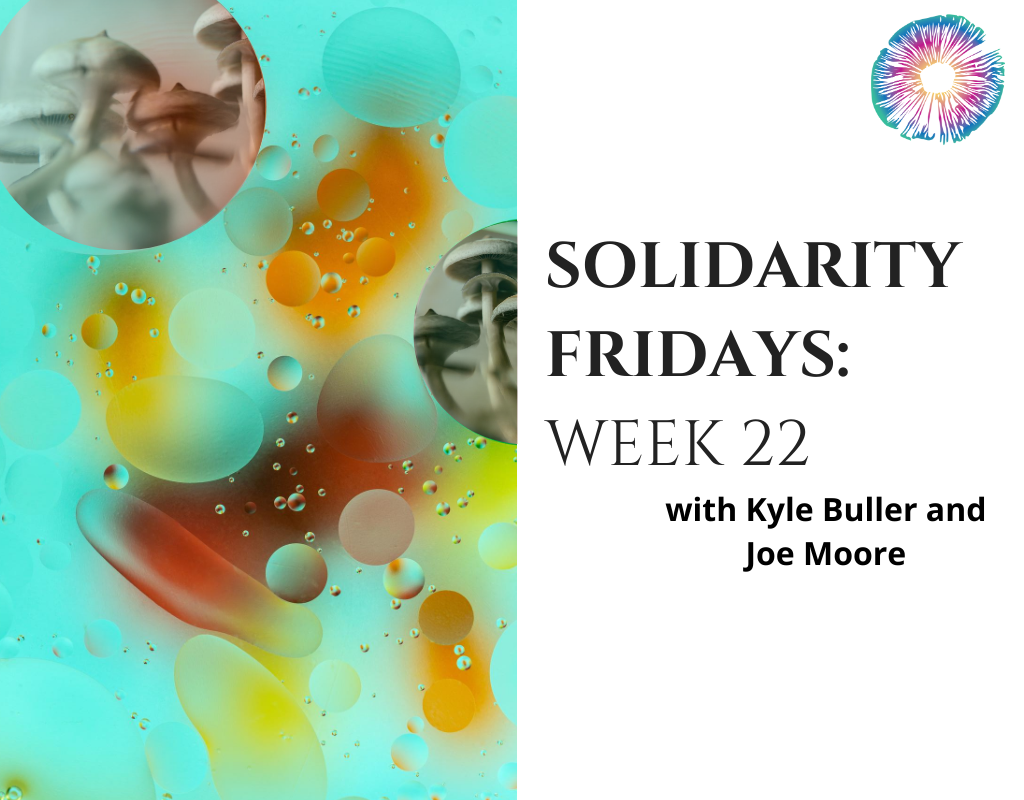 In today’s Solidarity Fridays episode, Joe and Kyle have, in Joe’s words, “a wildly rambling show.” They cover topics in the news, including MAPS’ recent completion of their Capstone Campaign, a non-profit fundraising effort to fund the final research required to seek FDA approval of MDMA-assisted psychotherapy (through which they raised $30 million from several high-profile names), MindMed’s new LSD-MDMA “candy flipping” phase 1 trial set to commence later this year, Representative Earl Blumenauer’s (D-OR) fundraising efforts for legal psilocybin and Oregon’s ballot initiative becoming a measure that people can vote on in November, and the Usona Institute resuming their previously COVID-halted psilocybin studies.

They then talk about a lot of different things: how to achieve psychedelic states without plants or drugs, Grof’s conclusions from 5000 sessions with clients, the dangers of Jim Jones-esque hero worship within communities, the seldom talked about global sacredness of tobacco, how big money coming into psychedelics both hurts and immensely helps the community, the Venus Project and the idea of restarting lives during the COVID life based on what really makes us happy, the impending doom of climate change and the changes we could all be making to help save ourselves, and the western tragedy of always working to become something and never just being. It’s largely a conversation about lineage, and making sure to give thanks and respect to the people and history that led to where we are today- not just in the psychedelic sphere, but in all things.

They also remind us that spots for September’s Navigating Psychedelics class are going fast, and there’s a new class available called Imagination as Revelation, developed by Kyle and Johanna Hilla-Maria Sopanen.

“My girlfriend, for some reason, had the Republican National Convention on TV last night, and Ivanka Trump was talking, and talked a lot about addiction and how big of a situation opioid addiction is, which is totally true, but like, with her saying that, to me, what that means is that there’s going to be an increase in funding to the DEA and the drug war, not an increase in funding for treatment. Because typically speaking, that party doesn’t necessarily want to fund treatment; they want to fund prevention, which they see as the drug war. They’ve not noticed yet that their drug war isn’t effective. I’d like to congratulate drugs for winning the war on drugs.” -Joe

“Let’s just cut the shit with the drug war. It’s racist, it’s horrible, it’s killing a lot of people still, there’s tons of political prisoners, still, in jail for cannabis, which in many states is being sold and people are making a killing on. It’s just insane to me that people are going to jail for not hurting anybody.” -Joe

“When we say the ‘psychedelic community,’ what is that? There’s so many different subsets and so many different people with different agendas. You have the folks who might classify themselves as being part of the psychedelic community that go to festivals and raves and they’re really submerged in that art scene, you have the psychedelic community of therapists and psychiatrists and people in the medical model wanting to do that thing, you have the Decrim Nature folks, you have the shamanic lineages. You have all these different little subcategories within a larger generalization of an interest, and everybody’s approaching it differently. People want to see different things happen. How can we come together? …How do we try to appreciate all different use cases and really respect where people are coming from and that we don’t need to fit it within these ‘this is the only way, this is the only model, and my way is better’ [paradigms]?” -Kyle

“Whenever I think about the archetype of America and the west, I usually think of the hero. Can we stop playing the hero role and could we start to look back at other archetypes and really appreciate other archetypes? Like, why does everybody have to go out and slay the dragon?” -Kyle

“Are you just getting really expansive and manic and you want that same yacht Usher has? Or do you want a garden and a small home and some sort of a community around you? Both have a certain kind of appeal, but what’s more sustainable? What helps you connect with your family more and the planet more? It’s probably the garden.” -Joe