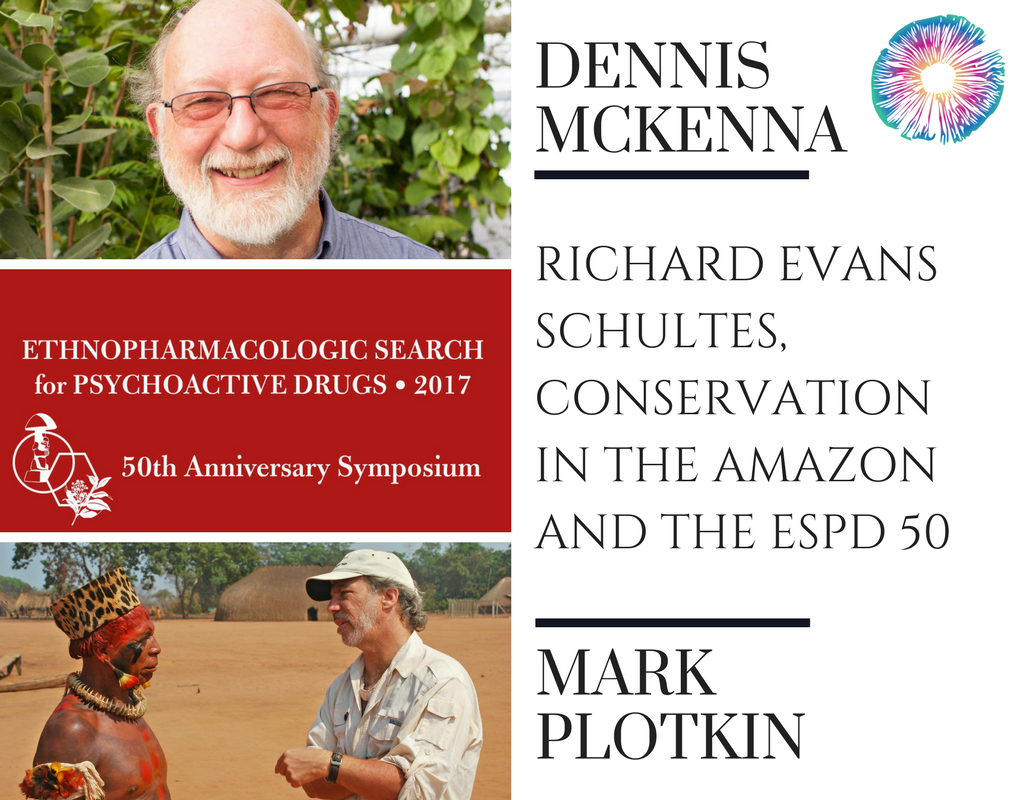 In this episode of Psychedelics Today, Kyle and Joe speak to Dennis McKenna (of Dennis McKenna fame) and Mark Plotkin founder of the Amazon Conservation Team. We discuss a broad range of subjects. One of the most interesting was a project that Dennis and many others have been working on for over a year at the time of recording this, titled Ethnopharmacologic Search for Psychoactive Drugs, which was a conference in the UK in 2017. It was a 50-year follow up to the initial event (and later seminal book) that Richard Evan Schultes, Ph.D. helped coordinate and host.

This link will take you to a page where you can see all of the talks that were given at ESPD50. https://vimeo.com/album/4766647

We really think you’ll enjoy the show. Please let us know what you think and if you can, pre-order the ESPD 50 to save some money on the post-release price.

“In 1967, a landmark symposium entitled Ethnopharmacologic Search for Psychoactive Drugs was held in San Francisco, California. It was the first international, interdisciplinary group of specialists – from ethnobotanists to neuroscientists – who gathered in one place to share their findings on the use of psychoactive plants in indigenous societies. Follow-up meetings were intended to be held every ten years, but the War on Drugs intervened.  The findings of the convention were printed in a book entitled with the same name as the gathering.

On the 50th anniversary during the month of June 2017 an international group of specialists gathered again to share their perspectives on past, present, and future research in ethnopharmacology.  The symposium was held at the spectacular Tyringham Hall in Britain.

ESPD50 was organized by a team led by Dennis McKenna, Founder of Symbio Life Sciences, PBC.  Synergetic Press published a collector’s box set including the first edition of 1967 plus a brand new book with the 50th-anniversary symposium’s findings.”

Dr. Plotkin has led ACT and guided its vision since 1996, when he co-founded the organization with his fellow conservationist, Liliana Madrigal. He is a renowned ethnobotanist who has spent almost three decades studying traditional plant use with traditional healers of tropical America. Among his many influential writings, Dr. Plotkin may be best known for his popular work Tales of a Shaman’s Apprentice (1994), which has been printed continuously and has been published in multiple languages. Other works include the critically acclaimed children’s book The Shaman’s Apprentice – A Tale of the Amazon Rainforest, illustrated by Lynne Cherry, and Medicine Quest: In Search of Nature’s Healing Secrets. His most recent book, The Killers Within: The Deadly Rise of Drug-Resistant Bacteria, coauthored with Michael Shnayerson, was selected as a Discover Magazine book of the year.

In 1998, he played a leading role in the Academy Award-nominated IMAX film Amazon. Dr. Plotkin’s work also has been featured in a PBS Nova documentary, in an Emmy-winning Fox TV documentary, on the NBC Nightly News and Today Show, CBS’ 48 Hours and in Life, Newsweek, Smithsonian, Elle, People, The New York Times, along with appearances on National Public Radio. Time magazine called him an “Environmental Hero for the Planet” (2001) and Smithsonian magazine hailed him as one of “35 Who Made a Difference” (2005), along with Bill Gates, Steven Spielberg, and fellow New Orleanian Wynton Marsalis.

Dr. Plotkin has received the San Diego Zoo Gold Medal for Conservation; the Roy Chapman Andrews Distinguished Explorer Award; an International Conservation Leadership Award from the Jane Goodall Institute; and, with Liliana Madrigal, the Skoll Foundation’s Award for Social Entrepreneurship. In 2010, he received the honorary degree of “Doctor of Humane Letters” from Lewis and Clark College in Portland, Oregon. Dr. Plotkin was educated at Harvard, Yale and Tufts University.

About the Amazon Conservation Team

The Amazon Conservation Team (ACT) is a non-profit organization dedicated to preserving South American rainforests. This small but robust outfit occupies a unique niche among other environmental non-profits working in the tropics: ACT works hand in hand with local indigenous communities to devise and implement its conservation strategies.

Dennis Jon McKenna is an American ethnopharmacologist, research pharmacognosist, lecturer, and author. He is a founding board member and the director of ethnopharmacology at the Heffter Research Institute, a non-profit organization concerned with the investigation of the potential therapeutic uses of psychedelic medicines.