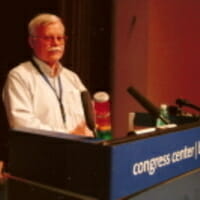 The future of psychedelic research is endless. There seems to be thousands of ways to get involved, and thousands of ways to approach the topic. In this talk, Kyle and Joe talk with Thomas Roberts Ph.D. — author of the book, The Psychedelic Future of the Mind: How Entheogens Are Enhancing Cognition, Boosting Intelligence, and Raising Values. Tom shares his story with us about how he got involved in the field of psychedelic research and education. Starting in 1981, Dr. Roberts taught one of the world’s first university-cataloged psychedelic course, “Foundations of Psychedelics Studies.”
We get into a great conversation with Tom about his early days at Esalen to talking about mindapps, mindbody states, and different ways to approach psychedelic research.

Thomas B. Roberts promotes the legal adaptation of psychedelics for multidisciplinary  cultural uses, primarily their academic and spiritual implications. He formulated Multistate Theory (2013) coined Singlestate Fallacy, mindapps, neurosingularity, metaintelligence, and ideagen, and he named and characterized the Entheogen Reformation (2016). He is a founding member of the Multidisciplinary Association for Psychedelic Studies, a cofounder of the Council on Spiritual Practices and the International Transpersonal Association, originated the Rising Researcher conference sessions, and launched the celebration of Bicycle Day to commemorate the day that Albert Hofmann first intentionally took LSD.

AB Hamilton College, MA University of Connecticut, PhD Stanford, Roberts is an emeritus professor of educational psychology at Northern Illinois University, where he taught Foundations of Psychedelic Studies as an Honors Program Seminar. Started in 1981 and taught through 2013, it is the world’s first university-cataloged psychedelic course.

In the fall of 2006, he was a Visiting Scientist at the Johns Hopkins Medical Schools’ Behavioral Pharmacology Research Unit (Griffiths psilocybin team).  His website is: www.niu.academia.edu/ThomasRoberts